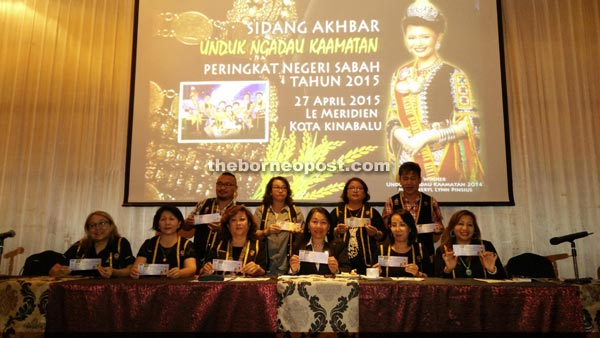 Joanna (seated fourth left) and the rest of the Unduk Ngadau Kaamatan Committee 2015 during the press conference yesterday.

KOTA KINABALU: Kaamatan’s next Unduk Ngadau would not only be the best embodiment of Huminodun but should also have an in-depth grasp of the origins of their ethnicity and heritage.

Based on last year’s feedback, aspects of the whole competition will also revolve around efforts to resurrect the almost forgotten traditions and heritage of the Kadazan, Dusun and Murut, said Unduk Ngadau Kaamatan Committee 2015 chairperson Joanna Datuk Kitingan at a press conference here yesterday.

A total of 42 lasses from the state’s districts as well as Klang Valley and Johor Bahru will vie for the title from May 27 before one of them is crowned on May 31.

Registration will be held from 8am on May 27 at Le Meridien Hotel, Kota Kinabalu, one of this year’s sponsors. On the same day, a Sodop Pintutunan (welcoming dinner) will see the presentation of sashes to contestants by Puan Sri Genevieve Datuk Kitingan and the pre-judging of the creative evening gown based on ethnic motifs.

“We want to emphasize on research of the original costumes. We want them (contestants) to know the history of their own cultures and costumes. It would be more meaningful for the younger generations to know the origin of different costumes of all the ethnicities.

“Evening wear is where designers can express their creativity. As we have done this competition for the past few years, it is high time that the designers incorporate rich multicultural motives and design in the evening wear. We hope that these designs would not only be current but also be fashionable and internationally recognized.

“It should be a classic that can be worn as formal wearable fashion that can represent the identity of Sabah. It’s not just about the ‘bling’ but about the stitching of patterns and motifs that tells of each ethnicity’s origin and story,” said the hopeful Joanna.

The committee will also focus on activities that would delve into traditions and practical way of the old life on May 28 at the state museum, where contestants will be given a talk on cultural tourism, public speaking, motivation, social etiquette and personal grooming, said Joanna.

They will also create experiences for contestants to learn the cultures of the old days that is no longer a routine and familiar to the newer generations such as traditional skills like the preparation of tuhau and hinava as well as the process of beading and weaving. Contestants will also learn about the different cultural houses.

Contestants will be marked on participation, discipline and learning ability. The activities and knowledge will also be part of the question and answer final presentation during the competition on May 31, which will be graced by Toh Puan Datuk Seri Panglima Norlidah R M Jasni.

The winner will win a cash prize of RM6,000 and a return ticket to Melbourne, Australia sponsored by Royal Brunei Airlines. More cash prizes of RM4,000, RM3,000, RM2,000, RM1,700, RM1,500 and RM1,300 respectively will go to the first to seventh runners-up while consolation prizes will be given to the other contestants.

Main sponsor, Altel, will sponsor the award for the Ratu Popular Altel and a scholarship for diploma course in tourism will be sponsored by ATI College for the Unduk Ngadau.

Proceeds from ticket sales for the Sodop Unduk Ngadau on May 29 will go to St Pius Children Orphanage in Bundu Tuhan, Ranau.

Tickets will be sold at RM5,000, RM3,000 and RM2,000 per table of 10 seats. RM1,500 tickets have already been sold out but the committee is also looking for sponsors to purchase a RM10,000 table so that more funds can be channelled to the orphanage, said Joanna.

Besides that, RM10 gallery tickets, excluding dinner, will also be available, she added.