Thursday, April 9
You are at:Home»News»Sabah»State govt gets WWF award for largest marine park 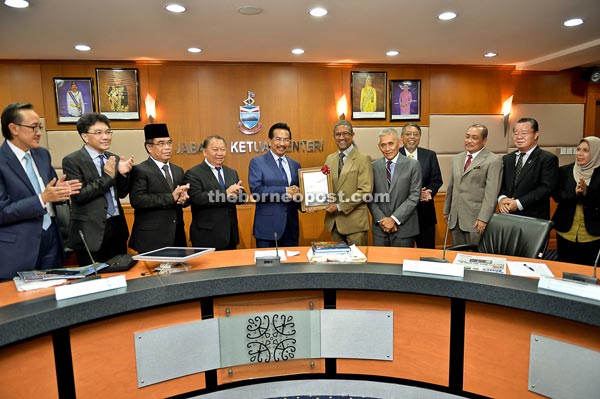 KOTA KINABALU: Global conservation organisation WWF yesterday presented its prestigious Leaders for a Living Planet Award to the state government in recognition of its effort to create the largest marine park in Malaysia.

Musa said part of Sabah’s great strength lies in the richness of the natural resources contained within the lush forests and bountiful seas.

The proposal to gazette Tun Mustapha Park will pave the way for conservation of a significant ecosystem and coastline, he said, adding the Sabah Government has long recognised the importance of conserving the seas surrounding its coastlines.

“We are committed towards efforts to protect our seas and terrestrial landscapes, as reflected in the State’s Halatuju and Sabah Development Corridor (SDC).

“In developing Sabah, we strive for a balanced and sustainable economic development, not to be at the expense of the environment.

“I wish to thank WWF for according Sabah Government this recognition and will strive to fulfill its objectives,” he said.

The proposed Tun Mustapha Park (TMP) represents almost one million hectares of marine protected area off the north coast of Sabah, Malaysia. The park will encompass 50 islands and will protect one of the world’s most biodiverse marine ecosystems.

WWF has launched a major global effort to emphasize the value of coastal marine resources to hundreds of millions of people around the world and to strengthen marine conservation.

As part of this initiative, WWF pledged full support to the state government of Sabah for the designation of the park and to help secure the funding required to ensure its effective management once created.

“The gazettement of Tun Mustapha Park is a globally significant action that will boost the conservation and biodiversity of this uniquely rich natural environment. It will also do much to ensure the sustainable management of the significant marine resources in the area, for the long-term benefit of the more than 80,000 people living on the coast and islands in the proposed park,” said Marco Lambertini, Director General of WWF International.

Fishing is a key economic driver of this northern coastal area of Sabah, with approximately 100 tonnes of fish – valued at US$200,000 – caught each day.

“Effective management of the Tun Mustapha Park will help ensure the viability of the area’s fisheries resources – and high quality ecotourism can provide hugely increased value, based on this natural treasure. The gazettement of this park should act as a model and an inspiration for marine conservation worldwide,” said Marco Lambertini.

Marco Lambertini also paid tribute to Dato’ Seri Tengku Zainal Adlin, chairman of Sabah Parks, for the outstanding contribution his organisation has made in the long journey toward TMP’s gazettement.

WWF’s Leaders for a Living Planet Award acknowledges the long-standing commitment of the Sabah state government to create the proposed Tun Mustapha Park. The award recognises the role the government’s lead agency, Sabah Parks, has played in advancing this issue and encourages the state government to designate the park as planned by the end of 2015.

“The announcement of the Sabah Government’s intention to gazette the TMP to create Malaysia’s largest marine park has not only national significance, but regional and global importance too as a significant marine area in the Coral Triangle – an area gravely threatened by overfishing and pollution,” said Dr Dionysius.

Dionysius Sharma paid tribute to the foresight of the Sabah Government led by the Chief Minister in declaring its intention to gazette the TMP.

WWF-Malaysia has been supporting the gazettement process and working with state government agencies and partners since 2003 through implementation of a number of strategies to support the establishment of the TMP, including community consultations, demonstrating benefits of marine protected areas, alternative livelihood programmes, and education and public awareness.