Tuesday, September 22
You are at:Home»News»Sarawak»New Mitsubishi Triton from Auto Pacifica comes with many ‘firsts’ 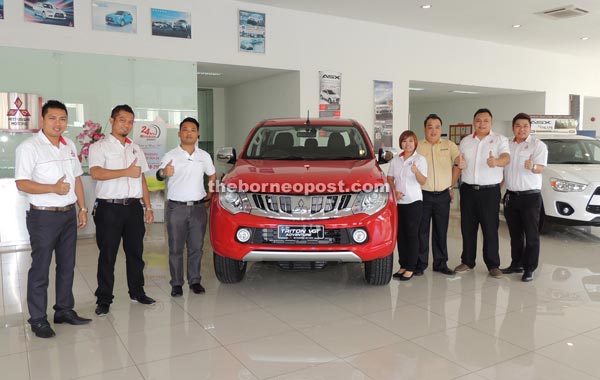 Jeremiah Lim (third from left) sales manager of Auto Pacifica Sdn Bhd and his team of sales advisors give the thumbs-up to the all-new Mitsubishi Triton VGT Adventure.

Compared with its predecessors, the new 2015 Triton sets the benchmark in the double cab truck segment by coming up with many ‘firsts’ which sets it apart from its competitors.

These ‘firsts’ features include: push start button for engine ignition, keyless entry system, Xenon headlamp with daytime running lights and most importantly, paddle shifters at the steering wheel (which is normally available on sedan and sports cars), where drivers could feel the joy of manually changing gears at the flick of the paddle.

Rally inspired and built with racing elements, this new double cab from Mitsubishi combines the concept and comfort of a sedan car, yet tough enough for the most demanding of terrains.

CEO of Mitsubishi Motors Malaysia Won-Chul Yang in his press statement said the new Triton, which is the fifth generation of the model series, has been developed based on the concept of ‘Smart Utility Truck.’

“We believe it will impress customers with its new design and enhanced features as well as even tougher engineering,” he noted.

According to him, Mitsubishi Motors Corporation has been producing pick-up trucks for the past 36 years; since 1978, over four million units have been sold worldwide.

The newly improved Triton 2.5-litre VGT turbocharged diesel engine, which is a result of years of Mitsubishi’s continuous engineering improvement, generates a maximum power of 178 horsepower and peak torque of 400Nm at 2000 rpm – the highest in its class for a double cab truck.

VGT which stands for ‘Variable Geometry Turbo’ which was introduced in the previous generations delivers uncompromising power and instantaneous response for acceleration while achieving high fuel efficiency.

With prices that start from RM71,000 up to RM114,000, the new Triton is available in 5 variants, namely – Triton VGT Adventure (which is the highest spec variant), Triton VGT Automatic, Triton VGT Manual, Triton Manual and the two-wheel drive Triton Quest.