Saturday, August 15
You are at:Home»News»Sarawak»Running short of rattan for weaving iconic products 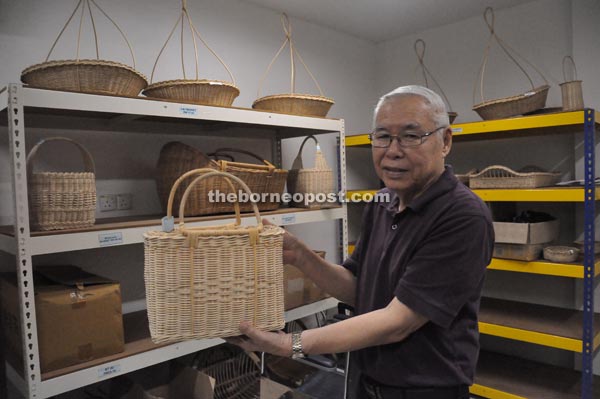 Ying showing one of the rattan baskets on display at SSB Kuching centre.

KUCHING: Sarawak Society for the Blind (SSB) is facing a scarcity of wild rattan in the state’s forests for weaving its iconic rattan products.

“We are left with a few places to obtain rattan from such as a vendor in Perak, who gets his stock from Indonesia,” Ying said when met by The Borneo Post at the centre along Jalan Ong Tiang Swee here yesterday.

The society was finding the import of rattan costly.

Among the rattan craft SSB has been producing and selling over the years are baskets, hampers, trays and baby cots selling from RM35 to more than RM200 each, depending on their size and quality of workmanship.

In the early 90s, the society made substantial profits from selling rattan products which helped towards the centre’s operating cost.

This year, SSB Kuching does not expect its profit to exceed RM1,000 as its weavers are cutting back on production.

He said the branch here was not alone in this predicament as their Sibu counterpart was also feeling the pinch from the shortage of rattan.

Some weavers have resorted to using alternative materials such as nylon strings.

As a means to diversify for survival, the society is collecting unused or extra cloth parchments from tailors to produce door mats or baby blankets using a technique known locally as ‘tampung seribu’ (patchwork).

Last year, Sarawak Forestry handed the branch here more than RM3,000 worth of rattan which it had seized in an operation in Lubok Antu.

“That was the last time we received free rattan,” Ying said.

They had even written to forest-related bodies to appeal for the donation of any rattan seized.