Monday, February 6
You are at:Home»Features»Biscuits baked with love
For the freshest news, join The Borneo Post's Telegram Channel and The Borneo Post on Newswav. 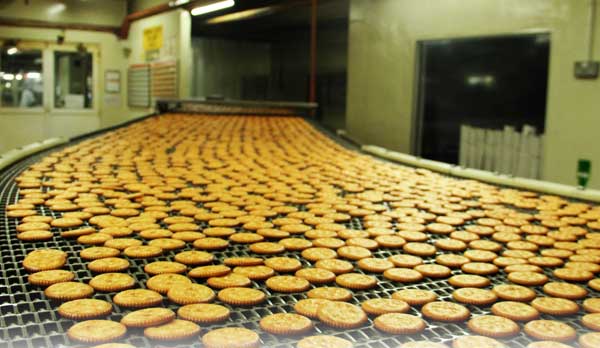 A FAINTLY delightful aroma wafted through the air as we alighted from the chartered bus. It was a sure sign of something delicious within the walls of the building in front of us.

The aroma was none other than the scent of freshly baked biscuits. Together with 12 other media representatives from Sarawak and Sabah, I was at the doorstep of Julie’s Biscuits Factory in Alor Gajah, Melaka.

Julie’s biscuits have been a household name for more than 30 years and being a fan of confectionery items, I was happy to have the opportunity for an exclusive tour of the factory recently.

The large sign on the roof that welcomed us was eye-catching — Baked With Love.

We were to learn of its meaning later.

Upon arrival, we were given a briefing about Perfect Food Manufacturing (PFM), the company that created the Julie’s brand name.

Soon after, we were prepared to visit the restricted production area. Careful steps were taken to ensure we were suitably attired and properly covered for hygiene reasons.

An intense heat greeted us the moment we stepped into the production area but the discomfort was offset by the heavenly scent of biscuits in the making.

We were guided through the production process flow by the customer relationship management executive Cathy Hoo and the corporate public relations and communications manager BB Lim.

From ingredients mixing to dough cutting to baking, the machines work hard. It was interesting to see how the biscuits travel through the conveyor belt from one section to the other. There are four biscuit ovens in this factory.

I was most fascinated by the wrapping station, in the air-conditioned area of the production line. Biscuits, fresh from the ovens, flow through machines that quickly wrapped them in the convenient packs so characteristic of Julie’s biscuits. It is amazing what technology can do in split seconds.

Right after wrapping, the convenient packs travel to the cartoning section, where workers manually pack them into containers and tins.

Despite the modest facilities at this factory and two other factories in Melaka, PFM produces more than 100 confectionaries under Julie’s brand since the early 1980s.

The company currently exports to 70 countries across South East Asia, Asia Pacific, Africa, America and the Middle East with a turnover of RM280 million last year.

This year, they are targetting to increase their revenue to RM350 million. 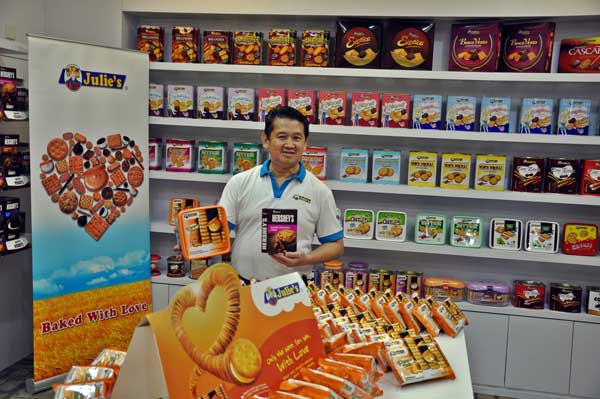 Ang during a sharing session with East Malaysian media.

During a sharing session, PFM director Martin Ang expressed his confidence that the company will be exporting to more countries in years to come.

“We are hoping to achieve our target of 100 countries in five years with a turnover of RM500 million. We are confident about this as there are still many who do not know the brand Julie’s so the potential is there.

“Since 2010, we have been taking part in many international expos and trade exhibitions, where we promote our brand as a Malaysian product. We want the world to know that despite coming from a small country, we can produce world-class products,” he explained.

Ang attributed the success of the brand to a simple philosophy that the company has embraced since its establishment in 1981.

“Julie’s biscuits are Baked With Love. We must be passionate in everything we do. In order to produce something good, it must be produced from the heart and we must put good things inside.

“We strongly believe that what we don’t eat, we would never let you eat. We will never compromise on the quality of ingredients even when prices go up. We will continue to buy them from quality multi-national suppliers.

“For example, the peanut butter we use is still the same since 1985, without going for cheaper or lower grade substitute,” he said.

Such strong commitment to quality was one reason why internationally renowned American chocolate brand Hershey’s chose Julie’s for a new collaboration that started late last year. 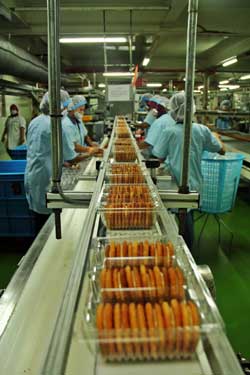 Biscuits heading towards the wrapping section.

In the collaboration, Julie’s and Hershey’s launched the Julie’s Hershey’s cookies that are available in six variants. They are sold in all 10 Asean countries as well as Taiwan and Mongolia.

Ang believed the collaboration was a good move where both companies complemented each other with their distinctive products.

“Hershey’s had been looking for a business partner in Asia. It is a first collaboration outside the US and we were handpicked for the co-branding. It is a big milestone for Julie’s.

“Why did they choose Julie’s and not some big factory in China? The Americans were impressed with the fact that despite our small factory size, our products can be found in many countries. Julie’s biscuits are in every Asean country and elsewhere.

“That, as well as learning about our quality and taste, has led to this collaboration,” he added.

As a company that has earned many industry certifications, honours and awards, PFM has clearly stepped up its game over the years and it was all done by following a simple philosophy of providing the very best for customers, employees, the society and the environment at large.

This philosophy can be further seen in the company’s various corporate social responsibility (CSR) projects.

Notable ones were the Share The Love movement where they paid tribute to the unsung heroes of everyday life in society, and the recent ‘Best of You’ social movement that encouraged individuals to find something or someone that brings out the best of them every day.

It is also reflected in how the management and staff treated us, their guests for two days. We were well taken care of during our tour of the factory. We were accompanied by Lim, marketing manager Benny Chia as well as the company’s East Malaysian representatives Anne Tay, William Sim and Chin Shin Hiung during a tour of historic Jonker Walk in Melaka town.

Lim, who is based in Kuala Lumpur, even made it a point to see us off at KLIA’s departure hall.

This short working trip was truly a warm and memorable one, not only for the tasty biscuits but also for the kind hospitality displayed by all at Julie’s Biscuits.

There is certainly much passion and commitment from the heart to provide the best. 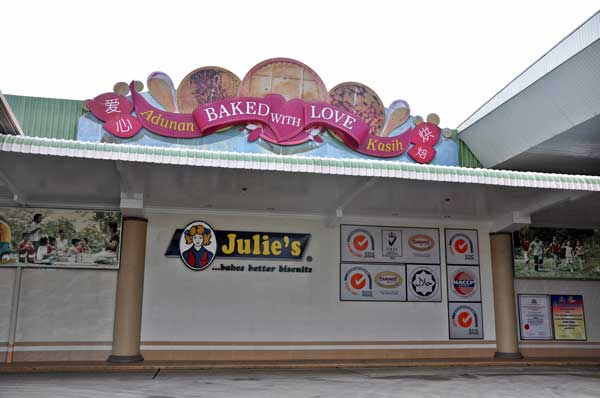 A sign that displays the company’s philosophy — Baked With Love.