Thursday, June 4
You are at:Home»Features»Rose Iwanaga and the Evergreen Dancers 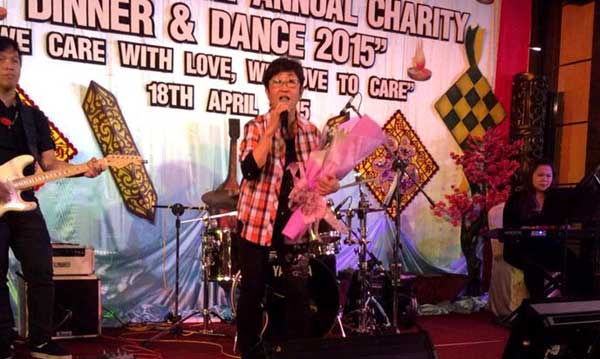 SO many of the post-war babies in Sarawak are fans of Rose Iwanaga and her band — the Avengers.

When her visit to Miri for two functions — one a charity dinner for the Palliative Care Association Miri (PCAM) and the another billed as An Evening with Rose Iwanaga at Gymkhana Club Miri (GCM) — were advertised, many rushed to buy tickets.

The Palliative Charity dinner was sold out while this was how a young man at the GCM event described it: “Never seen our elders dancing and singing like that before.”

It was a pity the original band — The Avengers — could not regroup for the Miri show.

Their stage costumes were ‘tasteful’ too. Wearing cowboy hats and boots, and lots of glitters and blinks blinks, the dancers took a lot of breath away.

Their quick change of costumes indicated they were very professional. And I am sure they won the hearts of many in the audience that evening.

Rose said it was only in 2006 she learned line dancing with a church group of ladies — primarily for health. They eventually became the Evergreen Dancers and have been performing together to raise funds for charity. 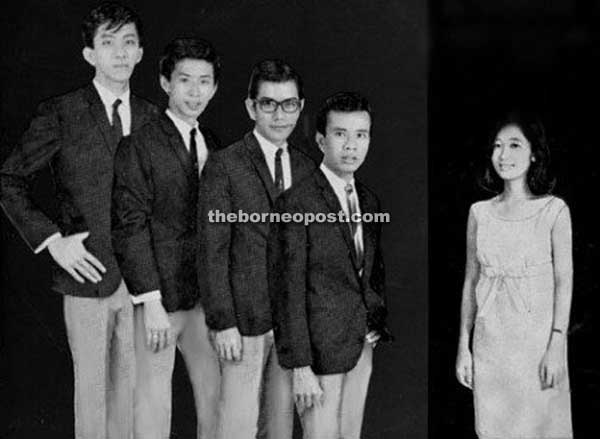 Rose Iwanaga and the Avengers

The members of the Kuching-based quartet were Jimmy Ho (lead), James Ong (rhythm) Peter Ho (base) and Jalek Zula (drums).

A lot has been written about the band and Rose Iwanaga. One writer commented: “Rose is a top grade singer.”

Once, after they had toured Brunei in conjuction with the Sultan’s birthday, the group’s show in the Sultanate was hailed by the local media as a ‘hugely successful venture’.

James Tan, a longtime fan and a musician himself, said the sound of the Avengers resonated well with the teens of the 60’s.

He opined that many local artistes could be just as good if not better than many of their counterparts in West Malaysia but for the fact that only the music scene in Kuala Lumpur and Penang had received proper exposure.

Rose and the Avengers were lucky to be able to cut a few discs.

They were really good together, Tan said, adding that he was glad he was in Miri to attend the functions, featuring the Evergreen Dancers.

Another long-time karaoke singer Tuan Julaihi said Rose’s recording of Too Young would always be a favourite of his and his peer group’s.

“No matter how many times we sing this song, we will never be bored,” chimed in a fan Pauline Umpau who loves music, singing and dancing.

Indeed, Too Young, You Belong to Me, I Will Never Find Another You and Will You Still Love Me Tomorrow are some of hits Sarawakians will always remember and it is all because of our very own recording artiste — Rose Iwanaga.

Rose is of Japanese-Chinese parentage. Her father was a Japanese businessman who migrated to Kuching long before the Second World War.

Rose was a popular Sarawak recording artiste throughout the 1960’s. Most local youths back then would tune their transistor radios to the local station for the programme — At Your Request — and ask for her songs to be aired. 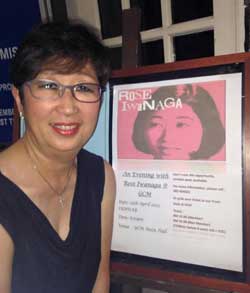 Rose was invited to Miri for the two functions by a friend, Veronica Wong.

Many of the guests livened up the PCAM charity dinner by joining Rose and the Evergreen dancers on the dance floor.

The atmosphere was festive, the dance-a-long spontaneous and the ice broken. It was truly an evening of music and dancing.

No less, a doctor and a lawyer went on stage to do their bit for charity by singing a song each.

Luke Bong, the MC, was in top form, and the young singer of the band in attendance also belted out a string of jazz numbers.

The charity dinner raised RM1,500 within a short time from the sales of handicrafts (made by PCAM volunteers) outside the ballroom.

An Evening with Rose Iwanaga at the GCM was also an unforgettable affair. Most of the guests happily took to the floor to dance with the Evergreen Dancers.

Rose sang many songs while her namesake Rose (Bennet) contributed a few numbers.

Mirian singers, mostly from the GCM Karaoke group, also rose to the occasion with a repertoire of popular songs.

Inspired by Rose Iwanaga, the old-timers also took to the stage ‘to impress her’. This was a night of humour, songs, music and fun.

“I have never had so much fun dancing for a long long time. I really felt welcomed by the Club members,” exclaimed one guest known as Theresa.

She had come with another friend who knows most of the Evergreen Dance troupe members. Many introductions were made and everyone was like old friends by nine o’clock.

The GCM Karaoke group is a well-established singing group. Most of the singers came under the tutelage of talented musician Ken Yip. After several months with the group, most budding singers could perform on stage.

Good singing is relaxing and comforting, according to Ms Yii who once conducted the Teacher’s Training College choir in Miri. She is most ready to help the College trainees who love to sing.

Ms Yii said discipline and togetherness enabled a singing group to excel, adding that soloists also had to work hard.

According to her, Sarawak has a lot of musical potential that can be explored and nutured — if professionals in the field are willing to take the budding singers under their wings.

“Music is a kind of medication no one can deny,” she said.

A septuagenarian fan, going by the name M Lau, said the voice of Rose Iwanaga would remain in “our hearts because she’s someone who not only does charity but also helps others in so many different ways.”

Lau now listens to Rose’s songs from a computer, linked to good speakers.

“I can never tire of her wonderful voice,” he said with a smile.

The hall of GCM was abuzz with music and fun. Other singers — Jay She, Julius Linggod, Stanley Chong, Veronica Wong and Rose Bennet — also contributed songs to make the evening one to remember.

The Evergreen Dancers also performed line dancing — to the delight of the guests.

A line dance is a choreographed dance with a repeated sequence of steps in which a group of people dance in one or more lines or rows without regard for the gender of the individuals, all facing either each other or in the same direction, and executing the steps at the same time.

They also make sure their movements are well synchronised. Every step, twist and turn is done with great discipline.

People watching the Evergreen Dancers at the Miri functions were amazed how these ladies, having ‘grandma status’ by their own admission, could tap their feet and execute very intricate dance steps.

The hot beats of cha cha, rock and roll, salsa and samba give line dancers the best opportunities to choreograph their own steps.

Line dancing is particularly good for seniors, according to a local dance teacher.

“It gets the old timers to dance together — even without partners.”

Rose said a line dancing group usually became the best of friends and were always there for each other.

“A few who are not dancing volunteer to be ‘managers’ of the group. That makes the team very strong and happy,” she added.

In Miri, Rose and her group enjoyed the hospitality of Veronica Wong and her family.

While doing charity, they also had time to meet up with friends, go sight-seeing and make new friends.

The evening at the Gymkhana Club was memorable and the bonus to take home was the happy memories of Rose Iwanaga and her Evergreen Dancers and the songs from GCM Karaoke group. 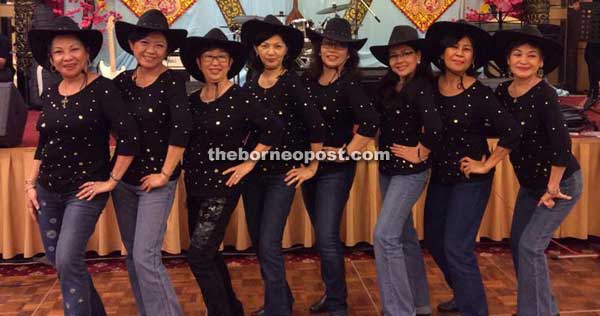 Line up of the Evergreen Dancers.

Previous ArticleA branch for the Sarawak diaspora
Next Article ‘Our community, our responsibility’