Wednesday, December 8
You are at:Home»News»Sarawak»Cultivate moderation through education 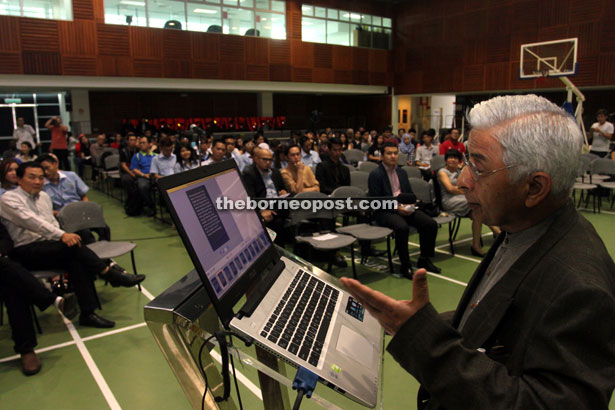 Shad delivers his talk on moderation. — Photo by Jeffery Mostapa

KUCHING: A reformulation of the country’s education system has been suggested as a means to cultivate moderation.

“If kids learn together, they will know how to live together. Schools must promote interfaith studies. Universities must strengthen the ethnic relations module,” he suggested during his talk ‘Citizens’ Role in Promoting Moderation’ yesterday.

The talk was part of the Unity Talk Series organised by the Sarawak Unity Foundation and Sarawak Development Institute in collaboration with Swinburne University of Technology Sarawak Campus.

Shad said most cases of intolerance were the result of an inadequate education.

He pointed out that every citizen has a role to play in cultivating moderation by practising it at home, schools, mosques, churches, temples, offices and neighbourhoods.

“All of us have a role to play, big or small. Never be afraid if our roles are too little,” he said adding that parents and guardians play a crucial role during the formative years.

“We can’t teach our kids what we don’t practise ourselves. The best sermon is a good example.

“For the sake of our children, we should broaden our moral and intellectual horizons. We should arm ourselves with the moral view that the primitive ethic of tribalism, racism, and religious exclusiveness has no place in modern society,” he said.

He pointed out the need to refrain from using derogatory epithets to describe members of other communities.

“Hate speech and caricaturing of races and religious must be avoided as well as false attributions and stereotyping. Wrongs committed by an individual member of a race, religion, region or nation should not be attributed to the entire group,” he said.

Shad also stressed the need to improve constitutional literacy among Malaysians for “our Constitution was a masterpiece of accommodation, compromise and compassion”.

“It walked the middle path, it gave to everyone something even in its ‘ethnic provisions’ it sought to balance the rights of races, religions and regions,” he said.

“Sadly, knowledge of the glittering generalities of the Constitution is lacking within the civil service, the citizenry and the political elite. If this knowledge could be enhance, a great deal of overzealousness will be moderated.”

He highlighted the need to return to the spirit of 1957 and 1963, calling Malaysia’s experience in the politics of accommodation and sharing of power unprecedented.

“Leaders must promote moderation. Our community and political leaders of all shades must condemn hate speech, hate crimes, and acts of intolerance strongly, publicly and consistently,” he said.

“We need to improve federal-state relations through regular consultations and constitutional councils especially in relation to Sabah and Sarawak,” he highlighted.

“Whether to love or hate, to be moderate or extremist – the choice is ours. Our religions, Constitution, culture and history have enough in them to enable us to lead lives of moderation and restraint in everything we say and do.”