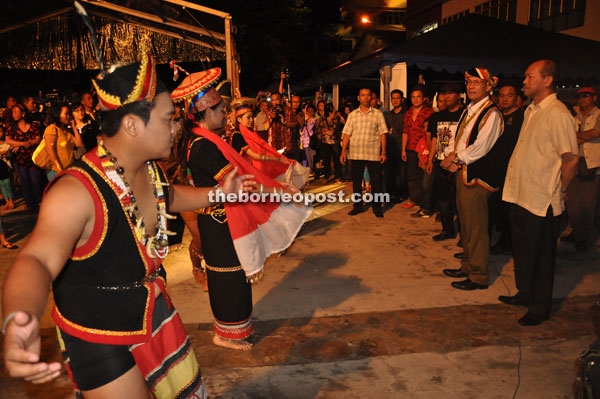 Riot (second right) being given a traditional Bidayuh welcome upon his arrival at the festival held at Taman Komuniti Serian on Saturday night.

SERIAN: The inaugural Bidayuh Music Festival 2015 that kicked off at Taman Komuniti Serian on Saturday night attracted thousands who came as early as 7pm to watch some of the best Bidayuh recording artistes performing live.

Officiating at the opening ceremony was Minister of Human Resources Datuk Seri Richard Riot who expressed his happiness over the overwhelming response to the festival, which acted as a prelude to the Gawai Dayak celebrations on June 1.

“This festival is also a grand gesture for Serian which has been elevated to become the 12th division in the state recently,” said Riot, who is also Serian MP, in his opening remark.

He further said the two-day festival could also act as a platform for Serian folk to further strengthen their ties and community spirit.

“I strongly believe that the people of Serian made up of Bidayuhs, Malays, Chinese and Ibans are in unison that a festival of this nature should be held every year,” he added. 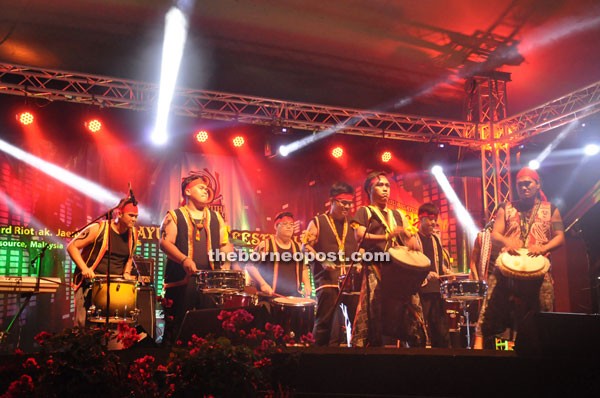 The Grand Drummers performing the opening gimmick after the official launch.

On another note, Riot extended his invitation to everyone to his Gawai Dayak open house at Kampung Pichin this June 7, starting at 4pm.

Also speaking was the Bidayuh Artists and Music Association (Bama) president Dr Alim Impira who introduced the history and role of Bama in pushing for the recognition and marketability of new Bidayuh recording artistes.

“The Bidayuh music industry has been in existence for more than 50 years. Bama will act as the umbrella for the recording artistes and continue to elevate the standard of this music industry,” he added.

Bama, he said, planned to hold similar festivals in Bau and Padawan in coming years. 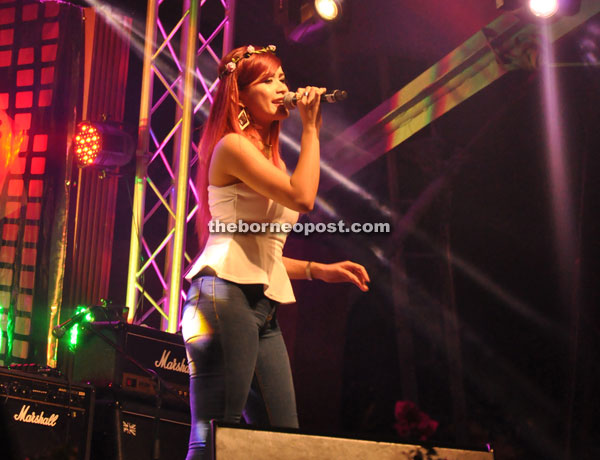 Angel BarBie singing one of her hits.

Jointly ran with the Serian District Council, the closing ceremony of the festival was performed by Kedup assemblyman Martin Ben. 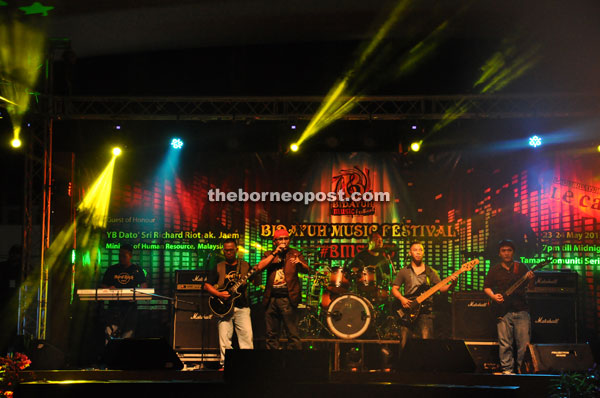 Hunters rocking the stage with their catchy numbers.