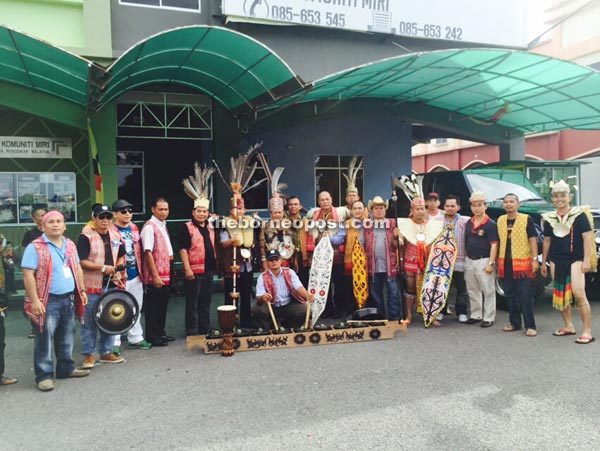 The organising committee ready for the parade. 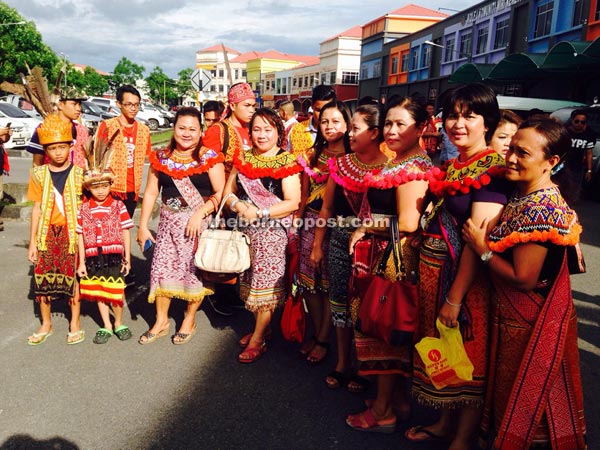 MIRI: The Gawai Dayak Parade held in conjunction with the first-ever Miri Gawai Dayak Bazaar was a tremendous success with over 500 people comprising mostly Dayaks in their beautiful traditional costumes participating.

It created history, giving great pride to the Dayaks not only in Miri but to the state and the country as a whole.

The parade was the highlight of the ‘Miri 2015 Gawai Dayak Bazaar’ mooted and organised by the Miri Unity Chapter (MUC), a Dayak-based non-governmental organisation (NGO).

It started at 4pm from the starting point at Kolej Komuniti in Permyjaya and proceeded to the car parking bays of Permy Mall, the site where the bazaar was held.

Thanks to the weather – it was perfectly fine and favourable – the event ran smoothly.

Leading the parade were the Gawai Dayak Bazaar organising chairman Emmanuel Sawing Kedit and members of his working committee.

The colourful scene was a crowd puller, with over 3,000 people from all walks of life thronging the premises to watch the participants in their traditional costumes.

“This is the first ever event of its kind that I know happening in Miri, since I migrated here from the First Division in 1987,” conceded one spectator named Racha Bungan to The Borneo Post.

Racha believed that many might not have seen the costumes before which were adorned with intricate designs and patterns representing the specialty and uniqueness of the Dayaks in terms of their traditional costumes, and of course, their cultures.

“And the togetherness of the Dayaks in this parade also portrays the unity among all,” Sawing said, referring to the Gawai Dayak Bazaar theme ‘Towards Dayak Unity’.

He also officiated at the closing of the ‘Miri 2015 Gawai Dayak Bazaar’.