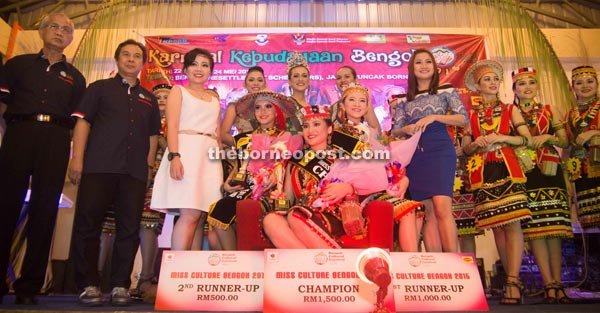 Fiona, who is with a local university and hails from Kampung Jambu in Padawan, received a cash prize of RM1,500, a trophy and certificate presented by the Assistant Minister of Public Health Datuk Dr Jerip Susil.

The beauty contest was the highlight of the three-day Bengoh Cultural Carnival 2015 which was held in a very festive atmosphere in the presence of thousands of spectators who filled the vicinity of BRS.

Dr Jerip, in his speech, said the carnival would be continued next year with a more thorough preparation.

He commended the efforts by the organising committee who only had a month’s run-up to lay the groundwork for the showpiece.

“The carnival coincides with efforts to promote cultural diversity of local communities to local and foreign tourists,” Dr Jerip said.

“At first, we did not expect so many visitors but apparently the response was very encouraging and this has inspired us to continue with this activity next year with early preparations,” he said.

“There were some shortcomings but they would be fixed for the carnival next year. Even the Padawan Municipal Council (MPP) has agreed to tar-seal the festival site, including the exhibition area and the food and drinks market.

According to Robert, the concept of next year’s festival would be maintained but adorned with more interesting activities.

“As the director of the festival, I would like to thank Datuk Dr Jerip Susil who provided the financial resources to ensure the success of this carnival and other sponsors as well as all parties and individuals who gave their full support and cooperation,” he said.

Also held during the carnival were a gong and cultural dance competition that was won by Kampung Garung Cultural Troupe. The runners-up were Kampung Giam Lama and Kampung Giit.

Meanwhile, Harmonica won the ‘Battle of the Bands’, followed by CAC’s Sound and Romonia JR, respectively.

The carnival included an exhibition by various government agencies, the food and beverage market and handicraft stalls.