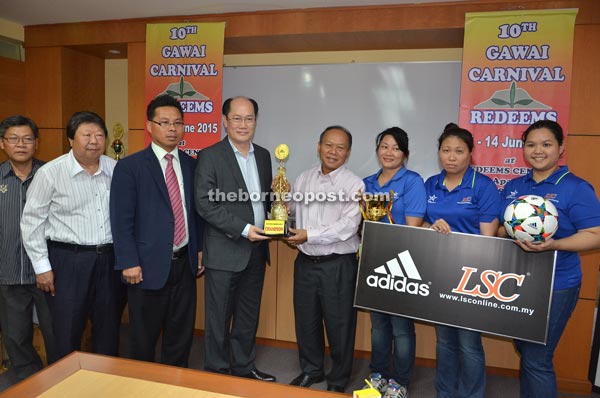 Nansian (fourth right) receiving the sponsorship from Sim at the occasion yesterday.

KUCHING: The upcoming Gawai Carnival Redeems from June 11 to 14 is the best opportunity for people to see the actual celebration of the ancient Bidayuh festival.

Redeems president Datuk Peter Nansian Ngusie said this time they will be showcasing the full Gawai rituals from ‘A to Z’ and as such it would be the best chance for the modern community to see the actual Gawai rituals as practised by the Bidayuh in the past.

“We no longer practise such rituals because most of us are now Christians but what we will do is just a show for people to see how our forefathers celebrated the festive occasion in the past.

“Gawai is in fact a festival for them to give thanks to the gods for their blessings and abundant harvests of padi for that particular year apart from looking forward to more success in the year to come,” he said.

He disclosed this when updating reporters on the upcoming Redeems (Research and Development Movement of Singai Sarawak) Gawai Carnival at a media conference at Redeems Centre Office at MJC here yesterday.

He said in this modern era most people no longer plant padi but they still celebrate Gawai to give thanks to God for the blessings given to them throughout the year.

“Gawai is a very special occasion for our community and because of that I, as president of Redeems, would like to wish our fellow Dayak friends a very happy Gawai Dayak 2015,” he said.

Nansian, who is Assistant Community Services Minister and Tasik Biru assemblyman, said in conjunction with Gawai Carnival Redeems 2015 various side events had been planned, starting from the morning of June 11 until midnight of
June 14.

“The highlight of the carnival is of course the gala dinner on June 13 which will be attended by Head of State and wife as special guests and Chief Minister Datuk Patinggi Tan Sri Adenan Satem will be our guest-of-honour for that night.

“Also since this is the 10th consecutive year of our carnival, Head of State Tun Pehin Sri Abdul Taib Mahmud will do the symbolic launch of the 10th anniversary of Redeems Gawai Carnival,” he said.

According to him, among the side events to be held throughout the carnival are sales of food and handicrafts, beauty pageant, warriors’ contest, blowpipe competition and football tournament.

“As such we are very thankful to Lea Holdings (M) Sdn Bhd for sponsoring promotion fishtails, banners, backdrop and prizes for the contestants in various competitions.

“We also want to give thanks to other sponsors for making this event possible,” he said.

Previous ArticleBusinessman robbed while jogging
Next Article ‘Recent visits by federal ministers part of job, not sign of early polls’