Thursday, June 4
You are at:Home»News»Sarawak»Chong blames ‘Big Six’ for deforestation 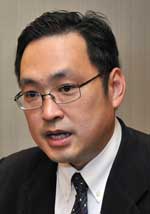 “The following is the gist of the answer that I obtained from the Government in Sarawak DUN sitting on April. I have asked for the list of all the timber licences and the respective acreage that are held by the big six logging companies in Sarawak, namely WTK Holdings SdnBhd, KTS Holdings SdnBhd, RimbunanHijau, Ta Ann, Samling and Shin Yang groups and their subsidiaries or related companies,” said the Kota Sentosa assemblyman.

Chong who is also Bandar Kuching MP claimed concessions given to the ‘Big 6’ are:

Therefore there were only 5 million hectares of forest for timber production out of which 70 per cent was already given to the Big Six, he said.

Compared to the 3.7 million hectares in which the Big 6 could legally chop down trees and destroy the natural forest illegal logging referred to by Chief Minister Datuk Patinggi Tan Sri Adenan Satem was just a drop in the ocean, stressed Chong.

Chong also noted that based on the statistics given there was an over-concentration of the timber resources under the control of the Big 6.

Such concentration of natural resources in a few companies is not good for the economic development of the general ordinary Sarawakians he pointed out.