Wednesday, July 28
You are at:Home»News»Sarawak»State confident of attracting 5 mln tourists 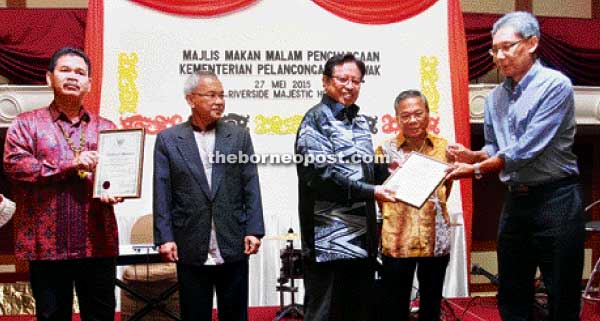 Abg Johari (third left) hands over an appreciation certificate to a recipient while (from left) Ik Pahon, Talip and Gramong look on. — Photo by Jeffery Mustapa

KUCHING: The state Ministry of Tourism is confident in achieving the five million tourist target this year compared to 4.6 million and a revenue generation of RM10.6 billion last year.

“That RM10.6 million is 17 per cent of the state Gross Domestic Product (GDP),” said Minister of Tourism Datuk Amar Abang Johari Tun Openg at the ministry’s appreciation night on Wednesday.

He said the state had the potential to achieve the (5 million tourists) target as there was a 7 per cent increase in tourist arrival in March and 8 per cent in April this year compared to the same period last year.

“Despite the connectivity problem, the number is encouraging and we will work hard to bring in more tourists to Sarawak. The service providers are expected to offer quality service and hospitality to welcome more tourists,” he said.

He said the ministry was looking forward to bring more tourists from the Middle East and China to boost the shopping businesses as they were known as big spenders of luxury goods.

Abg Johari said under the 11th Malaysia Plan, the state would focus on developing the service sector, specifically tourism and the state government had approved an allocation to boost the (tourism) industry.

“Apart from our culture, our history is another attraction of ours. We will upgrade 14 forts in the state to turn them into tourist spots. One international hotel will be built near the airport and the other is at the Isthmus,” he said.

He also said a theme park and a hotel would be built in Pasir Panjang, Santubong which would be completed in three years’ time.

On another subject, Abg Johari said he had yet to have the details about what Malaysia Airline System would be doing to improve the flight connectivity to Sarawak but believed there must be some good news.

He also said the ministry wanted to make the state a venue for tourism and filming.

He said the ministry had set up a special unit to assist film makers from China and Korea who had shown keen interests in shooting films in Sarawak after the Asean International Film Festival and Awards (AIFFA) in April.

“Film is another medium to attract tourists. New Zealand which usually relied on agriculture is now making much from tourism after the shooting of ‘The Lord of The Rings’ in the country,” he said.

He added the ministry was planning to shoot a series of celebrity chef TV programmes to promote Sarawak and its food.