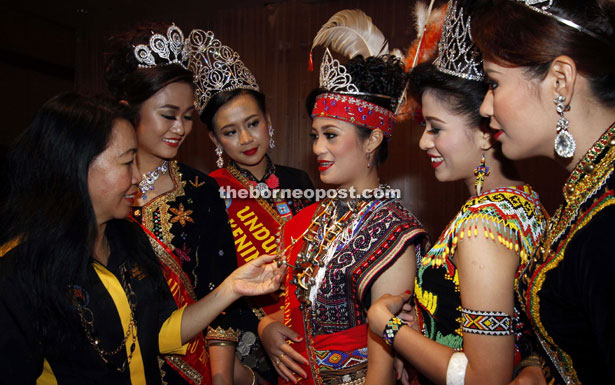 SEVERAL variants of the traditional costumes during the finale of the state-level Unduk Ngadau this year will be another attraction at the most anticipated peak of the Kaamatan festival celebration.

Participants from Lahad Datu, Sook, Kemabong, Keningau and Beaufort are expected to wear five newly-introduced traditional costumes which have been accepted by the organizing committee as the new addition to the other costumes that are being worn at the beauty pageant.

Organizing chairperson Joanna Kitingan said they had been emphasizing on new representations of the traditional costumes from each district by encouraging the district-level coordinators to come up with costumes that had not been highlighted before.

“We have many ethnic groups under the Kadazan, Dusun and Murut (KDM) group. Each ethnic has their own variant of clothing that can be worn by the Unduk Ngadau. That is why we need to go back to basics and refer to our own history to find out what we can present to showcase the uniqueness of KDM women.

“It is a good thing to discover something new because we want our people to be aware of the history. The reason why we want to return to basics is because we are looking at the evolution of our traditional costumes,” she said.

Kemabong representative, Cehrolley Judah will be parading her Murut Kemabong costume, which is embroidered with mostly red, yellow and blue beads. Colourful beaded accessories on her arm and neck are another new thing that will add the excitement of the pageant this year.

Mary Michelle Masidah from Keningau is also making an appearance at the finale with the Kujiau costume, which is the traditional attire of the Dusun Gana in the district. This costume in black colour was worn by one of the Unduk Ngadaus in the 90s, and it is making a come back by showing the high quality hand embroidery technique of the Dusun Gana people.

The Dusun Beaufort traditional costume called Kuizou will also be showcased during the finale by its representative, Kuay Jeaneve.

Joanna, who is satisfied with the traditional costume variants this year also said the organization had been trying to improve their roles in bringing up the image of the Unduk Ngadau as a respected beauty pageant by welcoming all feedback from the public, especially those genuinely looking at improvements of the annual event.

She said the representation of the traditional costumes had been a hot topic for the past few weeks, and was aware and understood the concerns and criticisms made openly in the social media.

“We want to see more new KDM costumes to be showcased in the district and state level Unduk Ngadau because we want to enrich our cultural heritage instead of wearing the popular ones like Penampang, Kota Belud, Rungus, Papar, Tambunan, Tuaran… I am sure even in these districts they have many other costumes which are worn during the various occasions in the past.

“We have different variants of the Bobolian costumes in every district, while there are also many types of attire worn by the Sumandaks (young women) all over the state in the past. I believe even mothers had their own style of clothing,” she added.