Sunday, October 2
You are at:Home»Columns»How I See it»A new leaf of Parliamentary Reform 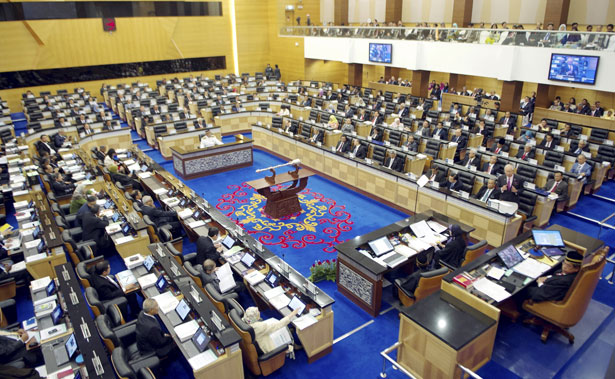 HAVE you watched the YouTube clip of Margaret Thatcher walking like James Bond with the 007 theme song playing in the background?

Unlike the super spy who turned to the camera to fire shots, the former UK Prime Minister turned — and her hand bag came flying.

It is quite enjoyable to watch the funniest moments, most embarrassing moments, best and worst moments of parliamentarians and assemblypersons in action.

There are many things to learn from these “honourable” lawmakers on the shows.

However, a lot of the relevant works and proceedings are conducted outside the chambers of parliament and legislative assemblies and, hence, there must be plenty of such memorable moments which have escaped the lenses of the video camera.

The Malaysian Parliament has made some headways in parliamentary reform most recently, and the process was spectacular, to put it mildly.

Just a bit on the background of this episode.

The Prime Minister’s office was under siege because the country’s economic and socio-political outlook is gloomy, a murder suspect dramatically sailed away to Australia and made exasperating statements, implicating the country’s highest office to the murder of the Mongolian socialite Altantuya Shaariibuu, and the worst being the unrelenting attacks on the Prime Minister himself over the financial scandal, involving the RM42 billion debt-ridden 1MDB.

At least two forces were in play to oust the Prime Minister, one preferring to end his reign through mounting the pressure in Umno while a former Finance Minister sought to overwhelm the Prime Minister through a motion of no confidence in parliament.

As Parliament is in session, all eyes are naturally trained on the Speaker as he plays a pivotal role in the proceedings of the House.

Hence, a bombshell was dropped when former Prime Minister Tun Dr Mahathir Mohamad revealed his meeting with the Speaker on the eve of this Parliamentary session, saying Tan Sri Pandikar Amin Mulia had resigned and his duties will be undertaken by his Deputy.

However, Deputy Speaker Datuk Ronald Kiandee immediately responded through a national newspaper that the exposure by Dr Mahathir was a hoax. He dismissed the resignation of Pandikar as pure speculation.

The next day, Pandikar himself denied he had resigned as the Speaker, saying he was ready to chair the swearing in of two new Members of Parliament and the debate session on the 11MP.

Dr Mahathir told the press corps the next day: “He (Pandikar) admitted he went to meet me, I did not ask him to. For him to deny this, it is embarrassing me. Why would he do this?

“He said he was not happy with the way Parliament is treating him as the Speaker.

“As a Speaker he has to meet with a lot of VIPs. His room is not very comfortable, the furniture in his office was in such a sorry state that he felt uncomfortable entertaining VIP guests there. Maybe that was why he wanted to resign. Furnishing was not given…,” he certainly made it sound hilarious.

The comical twist continued when MP for Johor Bahru and chairman of the Barisan Nasional Backbenchers Club (BNBBC) Datuk Shahrir Abdul Samad revealed the absence of a toilet in the Speaker’s office appeared to be the final straw that had led to the Speaker tendering his resignation.

The long-serving MP quipped: “How can you not pay respect and due regards to the Speaker?”

“It is not true I tendered my resignation because I was unhappy with the toilets or furniture in the Parliament building,” he told reporters at a press conference at his official residence.

“I tendered (my resignation) based on my desire to restore dignity to Parliament and make it a first-class parliament on par with other parliaments in the world. I am disappointed with the perception the Speaker works under the orders of the executive body.”

The new twist was a most welcomed development. Apparently, from his explanation, the Speaker had explained to the Prime Minister his unhappiness that the Malaysian Parliament was seen as a rubber stamp for decisions by the executive.

Deputy Prime Minister to oversee the implementation of the changes.

And, never mind too, the appointment of the DPM to oversee the implementation of the parliamentary reforms that the Speaker had asked being conflicting to his wish that the Minister in charge of Parliament be removed and that Parliament be fully in charge of its own administration.

What is most pleasing was the Speaker had called for a House Committee meeting, attended by BN and Pakatan Rakyat representatives three days ago, outlining four key reform agendas — the revival of the parliamentary Service Act (PSA); the introduction of an hour of “Minister’s Question Time” once a week where MPs can ask questions to Ministers; more parliamentary select committees and the introduction of a second chamber where matters and motions which do not need the Dewan Rakyat to decide on, can be discussed.

The bipartisan House Committee had unanimously agreed to the reform agenda and set a target of six months to tender a motion for reform in Parliament.

I certainly hope this well-intended parliamentary reform will not be aborted like its predecessor mooted in 2010.

From the Sarawak State Assembly, we should be pleased with this new parliamentary reform agenda.

I am pleasantly suspicious that our Datuk Amar Speaker had pushed for the reform agenda during the preparatory meeting of Commonwealth Speaker’s Conference earlier this month.

Who is to question that this Fairland Sarawak is gaining prominence and increasingly being looked upon as the locomotive for reformation in Malaysia?

Previous ArticleMurderers in the park
Next Article Cyber crime watch