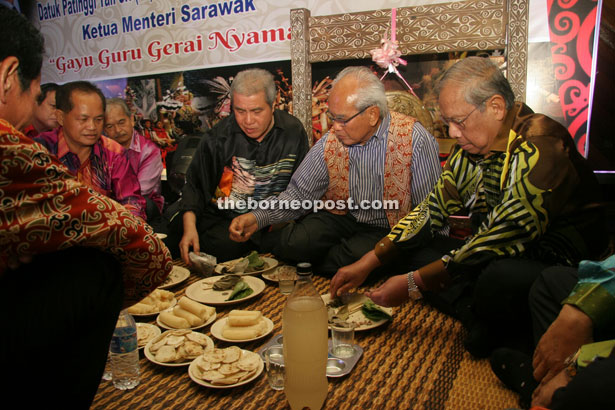 (From right) Adenan, Jabu and Awang Tengah at the ‘miring’ ceremony at the start of the pre-Gawai celebration at Lawas Indoor Stadium.

When announcing the approval of nearly RM30 million worth of projects here, mostly for the Lun Bawang heartland of Ba Kelalan, Adenan said Baru is with the ‘wrong crowd’ as only the BN government can deliver the goods needed by the people as opposed to the opposition’s token promises.

“Please feel that you are among friends. I will try to get the prodigal son to come back,” he quipped in a speech directed at Baru, who was among the guests at the Irau Aco Lun Bawang 2015 festival, at Long Tuma in Trusan yesterday.

Baru was seen smiling at the proposition but later declined to comment on the unexpected public invitation from Adenan.

Meanwhile, the Chief Minister also reiterated his firm stand against religious bigotry and racism, calling on the Lun Bawang community to be proud of their roots and cultural heritage.

He again promised Christians that as long as he is Chief Minister, they would be free to use the word ‘Allah’ in their worship.

Adenan added his appeal for another term to carry out his plans for the state.

“I need the support of all Sarawakians to give five years of my own mandate to speak from a position of strength for all Sarawakians in negotiations with the federal government and Petronas to make more concessions to benefit the state.

“I need another five years not because I want to continue be the CM but continue this cause,” he said.