Monday, August 2
You are at:Home»News»Nation»Oh My English returns with Class of 2015 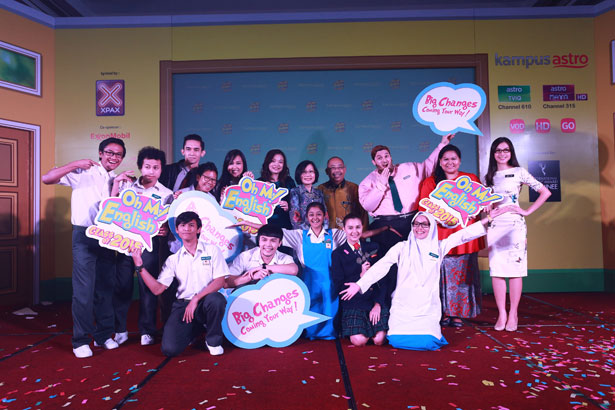 The cast of Oh My English! pose with Astro executives and media partners during the launch of the 2015 season last week.

THE use or alleged abuse of the English language in TV entertainment has a colourful history.

During the late 1970’s, the British comedy series ‘Mind Your Language’ – depicting a multi-ethnic class of foreign students taking pains to learn English – was a big hit among Malaysian viewers.

Even today, younger viewers can still recall re-runs of the show. Less well-known was the fact that the show was cancelled in Britain over concerns of racial stereotyping.

Twenty years later, many more Malaysians laughed at the iconic rough-neck Phua Chu Kang in the Singapore sitcom of the same name.

Much of the show’s popularity centred on the use of Singlish – the localised version of English mixed with local dialects and nuances. But the Singapore government frowned on it as it went against the use of proper English.

Welcome to Malaysia’s own Oh My English! (OME) – no controversy, just pure entertainment, and more.

Speaking at the launch of the new and fourth season of OME last week, Astro’s head of education Vickie Lai said: “Driven by the belief that education can be entertaining, we constantly explore new ways to inject fun into the series. The aim is to make learning seamlessly entertaining and effective in helping Malaysians improve their conversational English.”

Astro has the support of the Education Ministry and collaborates with the British Council to develop the English learning content for the show.

The latest season of OME sees our favourite 4 Merah students move on to their senior year. The audience will be in for a big surprise when they see Henry Middleton (Zain Saidin) who has undergone a physical transformation, making him barely unrecognisable.

Look out for special appearances by popular local artistes such as Achey, a member of Bocey from the hit comedy show ‘Maharaja Lawak Mega.’

Ean and Adam C from Malaysia’s No. 1 hit music station, Hitz fm, make cameos. To top it off, singer-songwriter Ed Sheeran is in for a special appearance.

OME recently made history with its nomination in the Children and Young People category for the International Digital Emmy Award 2015 – the first show in Malaysia to receive such a recognition.

The show has come a long way since debuting in 2012. The continuous support of students, parents and Malaysians at large has resulted in a record viewership of 7.9 million, making it the most successful edutainment show in Malaysia.

Beyond the TV platform, OME is also creating waves on social media with over 16 million views on its official Youtube channel,

They can also meet their favourite characters at holiday roadshows, meet-and-greet sessions, Oh My English! Day Out and Gembak Desa.

A total of 20 episodes have been planned for the latest season as well as two special telemovies to be aired during the school holidays.