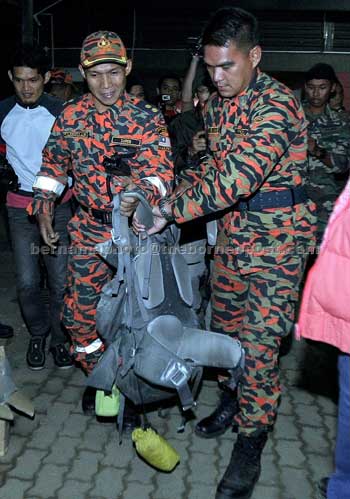 Members of Sabah Fire and Rescue Department with a large backpack, believed to have belonged to one of the climbers on Mount Kinabalu. — Bernama photos 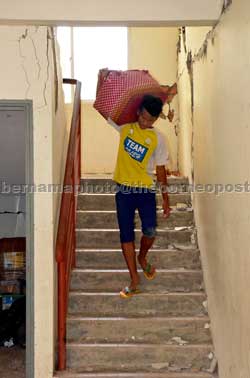 A resident of the teachers’ quarters at SMK Ranau carrying some items as he moves out of the building – one of many damaged. — Bernama photos

KOTA KINABALU: The Ministry of Science, Technology and Innovation said 32 aftershocks with magnitude of between 1.6 and 4.5 on the Richter scale occurred until 2pm yesterday since the major earthquake with a 5.9 magnitude struck Ranau on Friday morning.

He also announced that a War Room had been set up at the Meteorological Department office at the Kota Kinabalu International Airport.

He said it would be used as a point of reference for the public to get the latest information on the status of the earthquake and aftershocks that occurred through its 088-413691 and 088-413690 hotlines.

“In addition, the public could get information from the website of the Malaysian Meteorological Department (MetMalaysia) http://www.met.gov.my official web or mobile m.met.gov.my or facebook https: //www.facebook .com / malaysiamet or twitter https://twitter.com/malaysiamet or MetMalaysia Hotline at 1 300 22 1MET (1638),” Ewon added.