Thursday, August 11
You are at:Home»News»Sarawak»Chong finds buyer for Batu Kawah land for Adenan 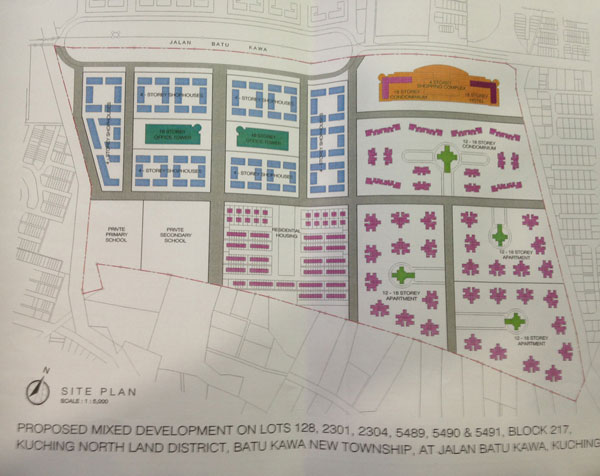 The proposed development plan by Purchaser A.

KUCHING: The state government will get at least RM505 million more if it cancels the sale of the 267.15-acre state land opposite MJC Batu Kawah New Township here to Standard Parade Development Sdn Bhd (SPD).

State DAP chairman Bandar Kuching MP Chong Chieng Jen, who said this yesterday, pointed out the state government, through an agreement dated March 8 last year with SPD, had agreed to sell the land to the company at RM115 million.

“At such price, it is only RM430,000 per acre when the market price of land in the vicinity is approximately RM2 million per acre. The RM115 million will be paid by SPD in kind, with two orphanage buildings in Lawas and Mukah and one Sabati building at Jalan Bako.

“Upon SPD signing the building agreement for these, the state government shall, within 21 days, issue title of the said land to SPD. Basically, SPD needs only to incur a minimal sum of less than RM500,000, and it can get the title of land worth at least RM500 million,” he said.

Chong said Chief Minister Datuk Patinggi Tan Sri Adenan Satem had challenged him to look for a purchaser, who is willing to pay RM550 million or more for the said land and the state government would cancel the agreement with SPD, as he exposed the land transaction during the State Legislative Assembly (DUN) sitting in April.

The Kota Sentosa assemblyman said three purchasers (known as Purchaser A thereinafter) had indicated their willingness to buy the land at RM620 million.

The Purchaser A, according to Chong, will perform all the obligations on the part of SPD under the agreement signed last year besides paying the state government 10 per cent of the proceeds of sale of the property including condominiums, apartments, shoplots, shopping centres and hotels built in accordance with the proposed development plan.

The total estimated proceed of sales based on the current market price is approximately RM4.9 billion, he added.

“Therefore, the state government will get an estimated minimum RM490 million in cash payment upon completion and sale of the property. If property prices increase over the years, the government will receive more from the agreed 10 per cent proceeds of sales.

“The Purchaser A will, at its own costs and expenses, build one primary school and one secondary school for the government. The estimated value of the two schools is approximately RM15 million.”

Chong stressed the Purchaser A’s proposal would enable the state government to derive benefits almost five times that offered by SPD, or an extra RM505 million more than what SPD was offering.

As such, he said no sensible government would reject the offer by Purchaser A; “Unless there is something hanky-panky going on between the BN (Barisan Nasional) leaders and SPD.”

Noting the agreement was signed nine days after Adenan was sworn in as the chief minister, he said Adenan could not disclaim any responsibility for the impropriety of such agreement.

“The fact that the land was sold to SPD at RM115 million and now there is a company who is willing to pay RM620 million is clear evidence of impropriety and smacks of some element of corruption in the dealing with SPD.

Chong said he would forward the Purchase A’s proposal and his letter to Adenan today.

“I have also informed Adenan in my letter that there are two more proposals coming from other prospective purchasers and such proposals will be given to me in about two weeks. I will upon receipt thereof, forward the same to Adenan in due course.”