Thursday, August 11
You are at:Home»News»Sarawak»Lu leads broom brigade after dengue cases in city 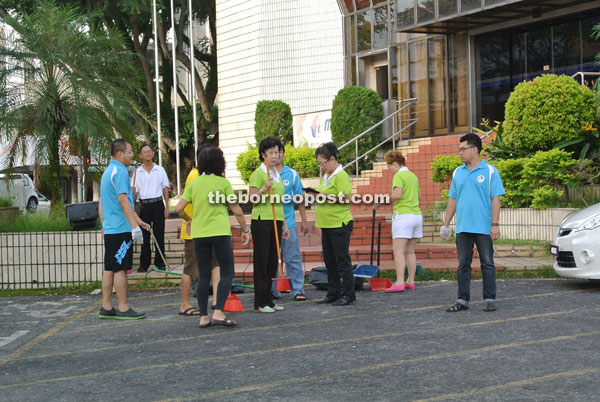 Some Chinese community leaders preparing to do some cleaning at Song Thian Cheok Road here.

KUCHING: With prevention paramount to combat the scourge after some dengue cases were detected in the city, the Kuching Chinese Community Leaders Association embarked on a cleaning campaign yesterday.

President Temenggong Lu Kim Yong said that after a meeting with the Kuching District Office, they found that there were some cases of dengue fever at Ang Cheng Ho Road, Song Thian Cheok Road as well as Ban Hock Road.

“In view of the seriousness of this issue, we, the Chinese community leaders in collaboration with the Kuching South City Council (MBKS), Kuching District Office and Kuching Health Department, are carrying out this cleaning campaign this morning to clean and destroy the breeding grounds for Aedes mosquitoes.

“We also wish to raise the awareness of the public towards the seriousness of dengue fever and how serious prevention of dengue fever is,” Lu told reporters yesterday before the cleaning campaign started.

He hoped members of the public would do their part by doing the necessary precautions to keep the environment clean and free of breeding grounds for the Aedes mosquito.

“They can easily breed in pots, ditches, plastic bottles, discarded tyres and other containers that contain stagnant water and the most effective way to reduce dengue infection is by declining the population of Aedes mosquitoes.

“Residents should clean their premises and living compound regularly to ensure that there are no stagnant water spots and cover all containers and buckets properly or even place pesticides in water to eliminate mosquito larvae,” Lu stated.

He also urged members of the public to seek medical help immediately if they exhibit symptoms of dengue fever.

“Symptoms include high fever, headache, skin rash, muscle and joint pain, pain in the back of the eyes and if the infection is more severe, stomach aches, vomiting and even bleeding. I urge people to see a doctor immediately if they have symptoms like this and especially so in the case of infants and younger children as dengue fever may cause death,” he emphasised.