Saturday, January 29
You are at:Home»News»Sabah»Narrow escape for 50 after train derailment 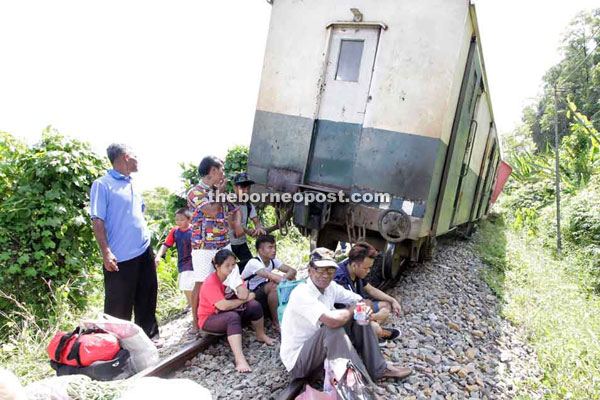 Some of the stranded passengers waiting for the train wagon service.

BEAUFORT: A four-carriage passenger train with about 50 passengers  derailed near Kampung Batu 60, near here yesterday, forcing the  State Railway Department to temporarily stop train services between the Beaufort-Tenom route.

The incident happened at 1.30pm, about 30 minutes after the train departed from here to Tenom.

The passengers were stranded for quite a while before a train wagon arrived to ferry them to their destination.

No casualty or serious injuries were reported but many of the passengers were shaken, according to an officer from the State Railway Department at the site of the incident.

He said train services between the Beaufort-Tenom route would be temporarily halted to allow the department’s staff to repair the damaged track and move the train carriages back on the track.

He added that the department was still investigating the actual cause of the accident.

A passenger, Medilina Tupang, described the incident as scary as it occurred suddenly, causing her and other passengers to be thrown from their seats to the cabin wall.

Medilina, who was in one of the carriages, said the train suddenly shook and then followed by screecing sounds before the train slipped sending the passengers screaming in fear.

“At first I thought the shaking was an earthquake because the passenger carriages were swaying from the left to the right.

“All our personal belongings were scattered on the floor and some were thrown out due to the impact,” she said.

Medilina, who hails from Kampung Batu 65 Seliwangan, escaped with minor injuries in the hand after being hit by an iron door.

However, she was grateful that her auntie who was travelling with her was not injured, but she was traumatized by the incident.

Previous ArticleRayong: UPP thankful to Najib for his support
Next Article More than 16,000 Rela members based in Sibu