Friday, December 3
You are at:Home»News»Sarawak»All-girl quartet brings message of empowerment 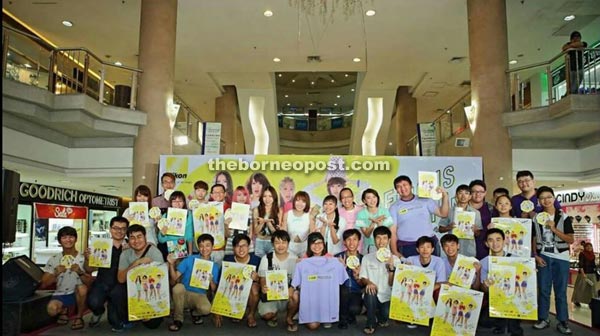 Members of Precious in a photo-call with their fans at Bintang Megamall Miri.

MIRI: Precious, a fledgling Malaysian all-girl performing group, is eager to encourage all women to be ‘brave and confident’.
During a promotional tour here on Sunday, frontwoman Ke Qing said their two new singles were aimed at helping them push this message across.

“We are young and energetic, so we hope to set an example to all women out there – be they 12, 22, 32, 42 or even 52 years old – to be brave in speaking their minds when something is not right; instead of being sheepish or easily intimidated.”

According to her, the two new Mandarin singles – ‘Zhi Jie Wen Wo’ (Ask Me Directly) and ‘Yu Ni Wu Guan’ (None of Your Business) – reflect the thoughts of today’s youths.

“The lives of technology-savvy youths revolve around the Internet a lot – so much so that they often confess their feelings for people they love or family members through text messages instead of talking face-to-face.

“Hence, ‘Zhi Jie Wen Wo’ seeks to encourage them to be brave and bold.” On ‘Yu Ni Wu Guan’, Ke Qing said it is basically about a relationship gone sour due to a third party, and the need for one to learn facing the consequences.

“In today’s society, there are far too many cases like this. It is important to let young people learn to be loyal in their relationships.”

Precious comprises Ke Qing, Hera, Estee and Yin Yin – all 21 years old. Their popularity is soaring despite being formed only last August. They have also been roped in as Nikon ambassadors.

“To be honest, it is not enough to just have beautiful appearance, nice vocals or the ability to choreograph in making it in the entertainment industry, particularly in Malaysia.

“Hence, we are lucky that every one of us has other talents in areas like song composing, video production and acting. We strongly believe that with talents, perseverance and good attitude, we can be successful internationally – perhaps in Taiwan and Japan,” said Hera.

The event here, which was the first leg of their promotional tour, was the only one for Sabah and Sarawak. After this, they will be touring across six cities in Peninsular Malaysia including Taiping and Penang.

The Sunday outing at Bintang Megamall hosted more than 100 fans who turned up to see their favourite all-girl group up-close.