Monday, August 15
You are at:Home»News»Sarawak»Daud breaks silence on MACC investigation 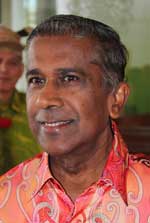 He admitted to the media yesterday that the commission froze RM4 million from several of his bank accounts nearly a month ago.

“Yeah, it is me. Nobody else (is) there. I fully cooperated with MACC, but I am a bit disappointed because publicity was given before the investigation was completed.

“It would be better if they made the decision after the investigation was completed. When it is still on-going, it is better for the matter to be kept among themselves. But since it is already out in the press, I think it is my duty to explain that we have fully cooperated,” he told reporters yesterday after launching a Gawai Dayak celebration at the Islamic Information Centre (IIC) here.

It was Daud’s first official function since the state MACC issued a press statement on May 13 regarding the investigation on alleged corruption and abuse of power involving the construction of Baitul Makmur II, a 16-storey building worth RM250 million.

Daud said his reputation would remain intact if the MACC investigation did not find any misconduct.

“If they found something, then it would affect my reputation. We must be fair to MACC that if there are complaints, they have to take action and investigate.”

He admitted waiting for the outcome had been a torture.

“Sometimes, I have sleepless nights but what can I do?

“We hope to hear the outcome as soon as possible. And I myself am frustrated with waiting.”

He revealed being called to MACC’s office for questioning on May 13: “Once only. You want to know the questions? But I am not allowed to reveal.”

On how soon any outcome could be expected, Daud quipped: “For me, I want it yesterday. What I mean is, I want a fast decision. But to be fair to them (MACC), we do not pressure them. Let them investigate fairly so that they are seen doing their job.”

Daud said he would rather the outcome be revealed sooner so that he could “sleep soundly or whatever – if not sometimes I woke up, worried also”.

“This is what happens. When you are being investigated, you are not sure what the outcome is. Even though we ourselves feel that we are right, we do not know the outcome. Let them investigate and we wait. That’s all I can say.”

On whether he would want to declare his innocence, Daud replied: “I am not allowed to say it until they find me innocent. If I say I am innocent, I am prejudicing the investigation by MACC when they have not carried out their investigation fully, and they have not made a decision.

“Whatever decision by MACC, everybody must accept it. Do not come back and blame MACC. We feel MACC would be fair and I do not comment whether guilty or innocent, until MACC has completed the investigation.

“We will accept whatever decision by MACC. And after that, we pray to God that the matter is closed.”

“The investigation is covering all aspects. As soon as everything is compiled and ready, it will be submitted to the Legal and Prosecution Division at the MACC headquarters,” he said.