Sunday, October 2
You are at:Home»Columns»How I See it»Fishing and the fishy gaming houses 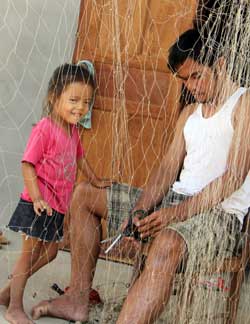 While you are waiting, inspect, repair, replace fraying ropes, mend the nets and if required rethread a new rope through the entire net, then at the right time, cast your nets in the designated place and at the right time to “catch men.”

I can only watch in amazement how quick he can gather and arrange a party for the fishing trip.

Fresh on my mind was the only fishing trip I had with the Lee brothers from Bintawa, in their kotak fishing boat more than 20 years ago.

In the short overnight trip, the family showed me how the hardy Kuching fishermen, mostly of Henghua clan, made their living. It is physically strenuous and laborious work under the hot sun.

The small kotak fishing boats have since been replaced by large and more powerful fishing vessels, equipped with modern gadgets, and fishing has also been developed into an affordable hobby or game for many in the last decade.

Moreover, fishing, as a game, has gone from going out to the waters with fishing rods and gears on a fishing boat to sitting in a fully air-conditioned premises aiming and firing the guns at the variety of fishes swimming across 51-inch LED screens.

My diligent colleague of neighbouring Batu Kawah constituency dropped a bombshell in the recent State Assembly sitting when she unveiled the uneasy company of a gaming centre next to her service centre, said to be issued with a licence for entertainment outlet by the local council.

The soft-spoken but equally hard-working MPP chairman denied the council had issued any entertainment outlet licence for the area and called on the police to take action.  Many had joined in the argument and just as many were caught in the crossfire. Credits to all parties who were vociferous, yet are in unison against the cyber gambling and illegal gaming centres, the particular gaming outlet was quietly closed down.

Unfortunately, that was just about the beginning of the state capital and other city and towns being overwhelmed with gaming outlets and the fishing machines.

“There are more than 100 gaming centres in commercial shophouse areas and probably 200 more in housing estates in and around Kuching,” a long-serving former councillor told me wearily.

He continued: “Remember the saying that nothing is illegal when a hundred well-placed businessmen went ahead and did it?”

I was alarmed when a shoplot nearby our service centre underwent renovation three weeks ago. Immediately, the neighbourhood was anxious when the workers revealed the renovation was for a fishing game outlet.

The MPP chairman was instantaneous in his response that no entertainment licence was issued for the shoplot. True to his words that the council would quickly liaise with the police, the gaming centre was closed down in two days. But I was perplexed why the public was always told there is nothing that the local councils can do, that they cannot act against illegal gaming centres.

“There is problem in our enforcement agencies,” the same former councillor said, and without mincing words, added: “Don’t just blame the local councils which have the least manpower and resources in enforcement. These fishing, horse racing and cock fighting gaming machines are banned in Semenanjung Malaysia. You cannot find them in any peninsular city and town at all. We are the odd state having these gaming centres now.”

But these gaming machines are huge. Each of the fishing machine is a compact box with electronic plates and wirings and it measures 5.25 feet in length, 4.25 feet in width and almost three feet in height – bigger than an office table. And it weighs more than 150 kg each!

If these bulky gaming machines are banned in West Malaysia, surely they are not allowed to be brought into this country. Is there exemption for Sarawak? How did these thousands of gaming machines escape and evade the close scrutiny of our custom offices?

But what about the police? Weren’t we told the police could not act because they were issued with entertainment licences by the local councils?

“That is just an excuse. Our councils can only issue limited entertainment licences for karaoke outlets, snooker centres, cyber cafés and in very rare instances, amusement centres, providing video gaming machines as entertainment in shopping complexes.

“Some said clubs and association premises can apply for entertainment licences to install gaming machines but that is not true. Furthermore, it would be illegal and an abuse of the licences for non-members of these clubs and associations, especially young children, to enter such gaming premises,” the former councillor said.

Indeed, if all the enforcement agencies can get their acts together, instead of giving excuses and blaming one another, we would be able to rid our cities and towns of centres for gambling and illicit activities.

The newly-appointed Padawan district police chief Ng Ah Lek has rightly pointed out the efficacy of invoking the provisions under the Common Gaming House Act 1953.

The Common Gaming House Act 1953, particularly after its amendment in 2013, has tightened the provisions and imposed stringent fines and penalties not only on the offenders but also those who are auxiliary to or found to have facilitated the operation of a gaming house open to the public.

Under the provisions, an owner or occupier of the shoplot or house faces the same stiff sentence as the person who runs the premises as a gaming house. Upon their conviction, all are liable to a minimum fine of RM10,000 and not more than RM100,000, mandatory imprisonment of up to six years. Additionally, there will be a fine of RM10,000 to RM100,000 for each gaming machine seized.

Furthermore, the premises may be ordered to be closed and seized.

The local councils will do well to stop gaming houses by issuing warnings to the owners and occupiers of the shops and houses to alert them of the stiff penalties they have to face for allowing their premises to be used as common gaming houses.

After all, these owners and occupiers are paying rates to the local councils.

Similarly, the community and political leaders do not have to lay all blames on the authorities as the Common Gaming House Act has declared common gaming houses as common and public nuisance.

They should report the common gaming houses in their vicinity and the police are bound to act on the offences accordingly.

In stopping these common gaming houses and other illicit activities, I do know there are officers of the local authorities, police and community and political leaders who have worked hard.

I certainly hope they will continue their good work and never stop doing their best just because others might not give them the credit.

It is our state, our country. Let us not fail for not trying.

It is the future of our children and their children.

Let us act together and give them a better future.

Previous ArticleIf a hydro dam collapses – whose fault (line)?
Next Article The state of the disability movement in Malaysia