Thursday, October 6
You are at:Home»News»Sarawak»‘Don’t provide ‘five-star hotel’ stay for Aedes to breed 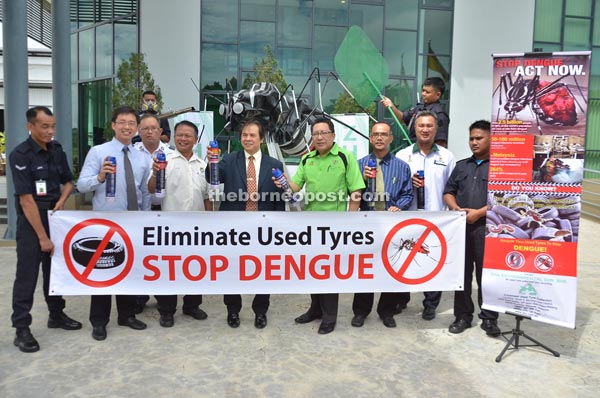 KUCHING: Reducing dengue fever cases boils down to not providing them with ‘five-star hotels’ to breed such as used tyres that are improperly disposed of.

“Indiscriminate dumping of used tyres creates huge stockpiles and clogs drains resulting in the breeding grounds of Aedes mosquitoes. Now that the state government has implemented a used tyre recycling project, we encourage the public to surrender their used tyres and cut down the number of ‘five-star hotels’ for mosquitoes,” Dr Jerip said at the Anti-Dengue Day at ZHA Environmental Sdn Bhd premises yesterday.

June 15 was declared as Asean Dengue Day during the 10th Asean Health Ministers’ Meeting in July 2010.

Both public and private hospital beds were overwhelmed with dengue sufferers in the first quarter of this year, to a point that patients with other medical conditions were deprived of hospital beds, he said.

The Health Ministry reported that 38,517 dengue cases were recorded this year (as of April) an increase of 9,703 cases or 33.7 per cent compared to the same period last year. Deaths caused by dengue rose from 66 to 120, an increase of 81 per cent.

Dr Jerip added that RM847 million was used in the whole country for the treatment of dengue fever in the first four months of this year.

“Dengue also adversely affects our economy. In addition to high cost for treatment, Malaysia also suffers from loss of productivity from the workforce as dengue fever confines patients to bed for seven to 10 days. Even the tourism industry is not spared as tourists stay away from endemic countries due to fear of being infected.”

In Sarawak, the hotspot for dengue cases is Sibu, followed by Bintulu and Betong.

“Dengue cases are however still at the manageable level even though we have a bigger area compared to other states like Selangor and Johor which have the highest number of patients. However, we must be vigilant at all times in taking preventive steps to combat dengue.”

Meanwhile, the state government has appointed and licensed ZHA Environmental Sdn Bhd (ZHA) to collect and recycle used tyres in the state.

The used tyres are collected by ZHA from vehicle repair workshops and also those irresponsibly discarded by the roadside. Since its operation, ZHA has recycled 1.5 million used tyres with it focus on Kuching, Miri, Sibu and Bintulu.

ZHA is the pioneer in Sarawak for the collection of used tyres for recycling. Operating from an 8-ha site in the Matang Integrated Waste Management Zone, ZHA’s Used Tyres Waste Management Facility collects and recycles an estimated 500 metric tonnes of used tyres, which is equivalent to two football fields, every month.

The rubber crumbs produced are sold locally and also exported to countries overseas such as Thailand, Indonesia, Australia and Singapore.

At the event Dr Jerip and other guests were given a tour of the plant by ZHA general manager Bernard Yong. Also present was a member of Kuching North City Commission (DBKU) Dato Wee Hong Seng.