Saturday, July 11
You are at:Home»News»Sarawak»Teary TCS tribute to Valerian Joannes who perished in Sabah quake 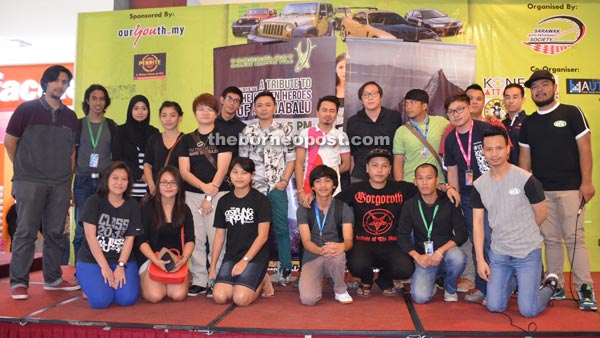 TCS chief operating officer Amin Aznizan (back row, left) and Augustine (front row, second right) in a group photo with performers and students from Technology College Sarawak during ‘A Tribute to The Fallen Heroes of Aki Nabalu’ mini concert held at CityONE Megamall on June 14.

KUCHING: A tribute concert for the late Valerian Joannes, one of the victims of the Mt Kinabalu earthquake on June 5 in Sabah, moved the audience to tears at CityONE Megamall on Sunday.

Organised by Technology College Sarawak (TCS) in collaboration with Leema and ERA fm, ‘A Tribute to the Fallen Heroes of Aki Nabalu’ mini concert was an initiative of the lecturers and students from the college in honour of late Valerian, who was an alumni of the college.

According to TCS chief operating officer Amin Aznizan, it was also to convey their condolences to his family, friends and the rest of the college’s alumni.

“When we heard that he was a victim of the earthquake, I strongly felt that TCS lost a hero. This is something that we would like to do to give back to him and his family to remember him and know that the late Valerian will always be with us and remembered.

“We admire his actions, valour, and bravery. He risked his life to help others and that is something that we should all be proud of. We will always remember him as a hero and an icon who inspired so many,” he said in his speech.

After a moment of silence with the audience, local artistes sang and played musical accompaniment.

The concert ended with singing star from TV reality show Mentor Legend 2014, Mal Imran, who delivered a touching performance of Anuar Zain’s Perpisahan that moved the audience to tears.

A slide presentation by TCS’s Student Council was presented at the event showing pictures of the late Valerian Joannes and his active involvement with the college. A close friend of late Valerian, Augustine Nyandang, delivered an eulogy at the concert.

“Valerian was a very outgoing person, happy and always smiling. He loved sports and singing. He was a committed person in whatever tasks he handled. Our heartfelt condolence goes out to his family. We will surely miss the presence of a truly loveable and kind person.

“We’ve lost a friend but heaven gains an angel. Rest in peace our beloved friend, you’ll be missed,” he said. Valerian was born in 1987 and died at age 27.