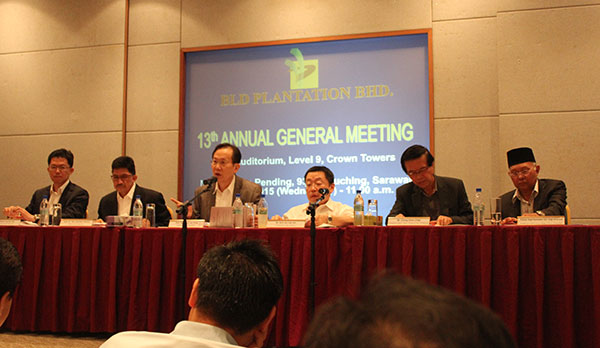 BLD Plantation Bhd aims to keep its costs low amidst a challenging outlook for the palm oil industry as crude palm oil prices remain lacklustre. According to chairman Datuk Henry Lau, global demand for palm oil and its related products have not been as encouraging as expected. This was on the back of increasing costs of operations including minimum wages, goods and services which Lau said were generally on the uptrend.

Shares of Felda Global Ventures Holdings Bhd’s (FGV) fell to a record low on Monday following its proposed acquisition of a 37 per cent non-controlling stake in PT Eagle High Plantations Tbk (Eagle High). Felda shares fell by 11 per cent on Monday when trading in the stock resumed after a suspension was imposed pending an announcement.

With speculation on a snap state election ramping up a few notches in recent days, analysts believe several of Sarawak’s stocks are adequately supported by fundamental and growth prospects, and are currently trading at undemanding valuations. AmResearch Sdn Bhd  said that while polls do not have to be called by June next year, the conjecture is for it to be held by the fourth quarter of 2015.

Eco World International Bhd (EWI) has scrapped its plan to set up a special-purpose acquisition company (SPAC) and aims to float its shares on Bursa Malaysia’s Main Market by year-end.

TNB sets condition for take over of 3B project

Tenaga Nasional Bhd (TNB)’s take over of the coal-fired 3B power plant project will be subject to terms and conditions, which includes the firm and final levelised tariff not exceeding 26.67 sen/kWh.