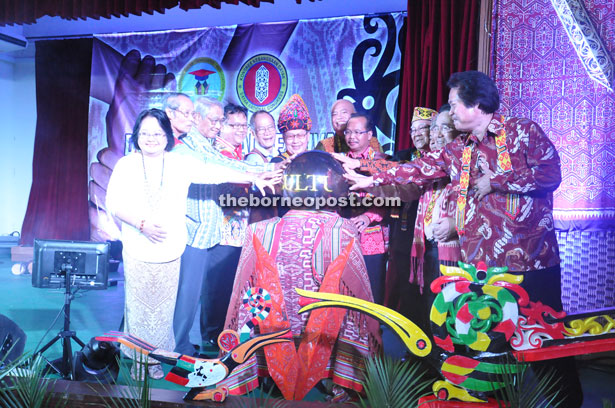 Dusit (seventh left, front) with Mengga (sixth left) and other guests launching the ‘One Dayak One Borneo’ dinner at DBNA Hall.

KUCHING: The ‘Dayak Cultural Festival’ hosted by Sarawak Dayak Graduates Association (SDGA) in collaboration with Dayak National Congress (DNC) could be seen as a melting pot for all Dayak communities across Borneo.

The inaugural two-day event, which concluded yesterday, was also a platform for these communities to foster resilient relationship with one another through their rich culture and tradition.

“It is vital to preserve the identity of the Dayak culture and tradition, which is being threatened by modernisation. If we neglect this, the identity of the Dayaks would be lost over time,” said SDGA president Dr Dusit Jaul during a dinner themed ‘One Dayak One Borneo’at Dayak Bidayuh National Association (DBNA) Hall here on Saturday, which was held in conjunction with the festival.

He added that it would be crucial for everyone regardless of background, social standing and political affiliation to come in arms towards ensuring the survival of Dayak culture and tradition, so that they could be passed on to future generations.

“Both SDGA and DNC are urging the Dayaks in Sarawak and Sabah to emulate the Iban Dayaks from Kalimantan, in terms of their strong dedication in preserving the originality of their  customs.

“The Kalimantan Dayaks seem to put their culture and tradition high on the pedestal, judging from their detailed ceremonial events up to traditional dances – they appear to be in deeper touch with their roots.

“In West Kalimantan alone, there are a total of 52 cultural associations representing the Dayaks at the national and global stage.

“I have been told that a dance troupe from Landak District was recently crowned champions of a cultural competition held in Taiwan,” Dusit said.

DNC president Mengga Mikui, who also spoke at the function, stressed that the festival should never be intertwined with politics.

“We need to have a group of elders and leaders who can be the advisors who address certain issues pertaining to the Dayaks. They can become the pillars for the community as a whole,” he said.