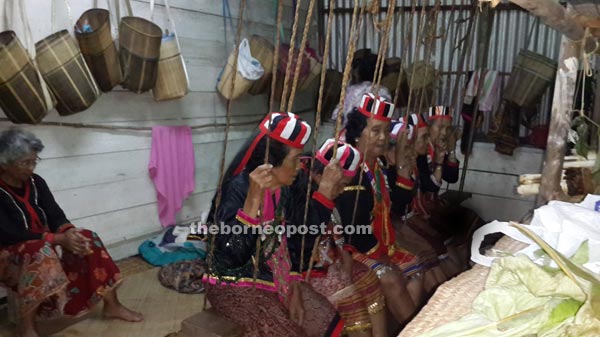 Female shamans reciting prayers to their deities at the village’s ‘Boli Gawea’ while sitting on a swing.

BAU: The Bidayuh village of Kampung Serasot near here chose to celebrate the Gawea Festival on Saturday (June 20) instead of June 1.

Yet, that did not stop thousands from flocking to the village to join in the celebration.

According to villagers of the Jagoi Bidayuh Dayak sub-ethnic settlement, the Gawea celebration held last week was their version of Gawai Dayak – the only difference is that it is usually celebrated after June 1, the official date for Gawai Dayak in the state.

They claimed that the Gawea in their village is one of the state’s iconic Dayak festivals and is very popular even among outsiders.

One of the villagers, Henshell ‘Kojek’ Ranged, when interviewed during the festival commented that during Gawea the main activities were ceremonies held at the village’s ‘Boli Gawea’, which is a house specifically used to host the events.

Henshell, who is known as Kojek by the villagers, said an altar of offerings was placed outside the Boli Gawea during the celebration.

Other activities were dancing at a site they aptly called ‘Boli Disko’ or Disco House, situated outside the village’s main area.

Freddy ‘Longek’ Michael, whose mother is from Serasot, said the place was normally packed with youngsters who just wanted to let their hair loose and have fun while listening to music.

Music played there ranged from Indonesian to local Dayak music, which they called ‘musik mejeng’.

Longek revealed that the Boli Disko would open from evening to early morning.

While all the activities took place, the villagers would host open houses and welcome relatives and friends.

“It is more or less like the Gawai Dayak, only it is not on June 1. We like it that way and this is what makes this village’s signature Gawea festival unique,” commented Kojek.

The events on Saturday night was the culmination of the celebration as it actually started on Thursday.

A unique festival indeed, the Gawea Festival, celebrated around Bau and parts of Lundu District is truly a spectacular Jagoi Bidayuh Dayak sub-ethnic event not to be missed, especially for those who want to get to know Sarawak and Borneo better.