Saturday, May 15
You are at:Home»News»Sarawak»Dams, fault lines and quakes 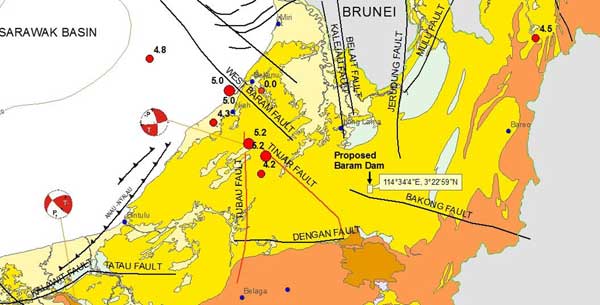 The Seismotectonic of Sarawak showing the earthquake epicentres with magnitudes of 5.2 and 4.2 located on the Tubau and Tinjar Faults, respectively, and the proposed Baram Dam.

Shirley Bida of Rumah Libai and many of the villagers were taking a bath in a stream when the water suddenly waxed choppy, sending them fleeing for their lives to the banks.

“We thought there was an antu ai (water spirit). It spooked us so much that we scurried out of the water, trembling and crying,” she recalled.

Bibi Julang and Jualai Balai of Rumah Semawar were not as fortunate. Both suffered injuries when a roof collapsed on them.

Cracks were found on two stretches on the road, leading to  a plantation. A landslide was also reported in the area while  a huge boulder perched on top of a hill came tumbling down.

Within the disaster zone were the longhouses in Niah, Sibuti, Bakong and Suai. News of tremors hit the front page of newspapers in Sarawak.

Former director of Minerals and Geoscience Department Sabah Alexander Yan said the earthquake that affected the four areas — Niah, Sibuti, Bakong and Suai — in May 2004 was actually due to  a fault line called Tubau, some 85km from the proposed Baram Dam.

It was a magnitude 5.2 and felt in Miri and also Bintulu.

He pointed out that another tremor, measuring at magnitude 4.2, occurred a year later — on April 19, 2005 — on another fault line, 32km from the Baram Dam.

“This one is an active fault called the Tinjar fault. So there are two fault lines quite a distance from the proposed Baram Dam that are capable to have some impact on any dam or structure around that area.”

Sarawak has mapped out 12 dams — from mega to smalle ones. In the pipeline now are the Baram Dam and the Baleh Dam. Two mega dams — Bakun has been completed and commissioned while Murum has completed but partially commissioned.

“The reality is the Baram fault is located about 30km from the proposed Baram Dam which we consider in general design practices as a safe dismiss.

“The typical earthquake we are talking about here is from five to 10,000m below the surface and the weight of the reservoir is actually very little compared to the earth.

“So scientifically there is no proof so far that the reservoir can induce earthquake,” Torstein told The Borneo Post earlier this month, maintaining the same view in another interview with business radio station BFM on June 22.

‘No one has ever been killed by dam-induced earthquakes’ 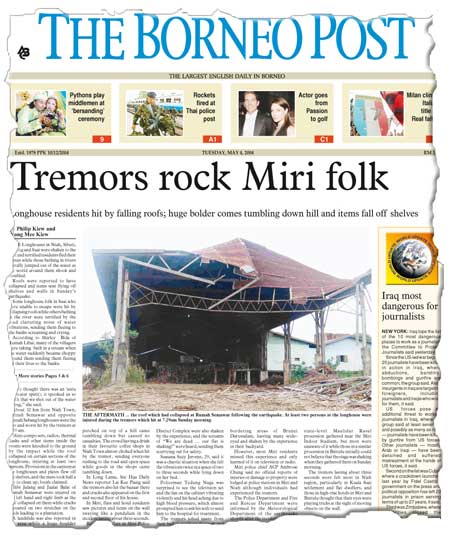 The SEB CEO stated his case:

“And, of course, it’s something we will study. This is also part of the detailed study we are doing on Baram. As a matter of fact, up till today, no one has been killed by earthquakes induced or impacted by hydro dams.

“So far, the statistics show there are 800,000 dams in the world — 57,000 are large dams and there have been millions and millions of earthquakes all over the world and to date, zero people has died because of this combination.”

However, Yan refuted the claim of zero death caused by dam-induced earthquakes.

“The claim that there is zero death due to dam collapse caused by earthquakes in the world is not entirely true.

“According to the JJM (Malaysian Meteorological Department) report, over a period of three years, beginning in 1984, the area around the Kenyir Dam in Terengganu recorded about 20 tremors, the strongest being magnitude 5 on the Ritcher’s scale.

“The tremors were caused by the impoundment of the reservoir,” he said.

Yan showed thesundaypost a number of publications on the Kenyir Dam.

In the case study in 2002 by Che Noorliza Lat of Geology Department, University of Malaya, it was stated that the tremors in Terengganu were reservoir-induced seismicity (RIS) caused by the impoundment of water.

“In Malaysia, RIS was made ‘popular’ by the occurrence of tremors after the Kenyir Dam was built in Terengganu.

“The Kenyir Dam is 150m high with a storage capacity of 13.6 cubic kilometres. Built in a previously aseismic area, it was responsible for several earthquakes from 1984 to 1987.

“The Seismoogy Department Warta Geologi, Vol 28, No 5, September-October 2002 of the Malaysian Meteorological Services, recorded a total of 28 earthquakes with magnitudes ranging from 2.5 to 4.6.

“The tremors were felt at a distance of more than 50km. The area now is again aseismic — a suggestion that the region may have achieved a new, stable stress regime,” the study said.

It also said the general rule of thumb is that dams with a height of more than 100 metres and a capacity of more than one cubic kilometre may be prone to RIS.

With a lot of large dams, exceeding this criteria being built for water and energy supply around the world, the need for RIS assessments is crucial to ensure people, property and the environment are safe during and after the construction of each dam, the study suggested.

It quashed the claim of zero death from earthquakes, induced by dams, as claimed by Torstein, with this statement: “Even though statistically, less than 20 per cent of large dams experienced RIS, reservoir-induced tremors, such as the magnitude 7.0 in Koyna, India, have been known to destroy the dam and cause casualties and damages to villages downstream.”

The Hindu newspaper reported the disastrous Koyna quake in 1967 killed 180 people, injured 1,500 people and rendered thousands homeless besides damaging the dam itself and scientific data obtained from the various reservoirs established the RIS link beyond doubt.

Noorliza said most RIS occurred near the dam, originating from shallow depths. RIS has been known to occur as early as during dam construction to as late as 18 years after completion.

Yan pointed out in Japan the Fujinuma Dam which was an earth-fill embankment dam in Sukagawa City, Fukushima Prefecture failed 20 to 25 minutes after the Tōhoku earthquake on March 11, 2011 as the nearly full reservoir over-topped the dam’s crest.

Locals reported hearing a loud burst before seeing a flood which washed away five houses while damaging others, disabling a bridge and blocking roads with debris. Eight people were missing and four bodies discovered after searches began at dawn. 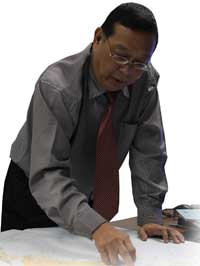 Forwarding his recommendation of studies needed to be done by Sarawak before the construction of Baram Dam or any other dam for that matter, Yan said: “They have to determine the peak ground acceleration and the seismic loading, and factor it into their design so that the dam built can withstand an earthquake of say more than magnitude 6 because we had occurrence of 5.2.

So try to design a dam that can withstand more than magnitude 6 on the Ritcher Scale.

“I believe they are doing it because nobody will build a dam without taking into consideration the seismicity of the area. This is to make sure no fault with potential to create earthquake lies inside the dam itself or in the surrounding area.

Torstein is holding on his belief that the dams built could withstand earthquakes.

“Our dams are designed to operate normally during an earthquake with a magnitude equivalent to the recent one in Sabah which is 10 times higher than what is expected in our hydropower region.

“All our hydropower dams are able to withstand earthquakes measuring up to magnitude 7 on the Richter Scale. Be assured that the integrity of the dams will not be impacted by an earthquake intensity 15 times higher than the expected maximum in our hydropower region,” he told a media conference in Kuching recently.

“Even if the Murum HEP were in Ranau, where the earthquake occurred, it would still be operational,” he assured.

Torstein also said SEB had conducted seismological studies, addressing deep seismic activities in the region, adding that the selection of the site was made after taking into consideration all the investigations conducted in pre-feasibility and feasibility studies, including potential sesismic hazards.

Meanwhile, Yan, a registered professional geologist and a council member of the Institute of Geology Malaysia, as well as member of the Board of Geologists has identified several earthquake-generating faults, as well as active and potentially active faults that can generate earthquakes. 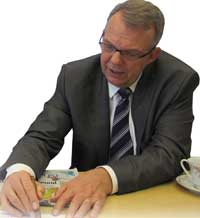 These faults include those in the Ranau-Kundasang area where a 5.9-magnitude earthquake rocked Mt Kinabalu and Ranau area, claiming 18 lives.

“The faults that have been identified are the active Tubau Fault and the Kelawit Fault. The 100km long, N-S trending strike-slip Tubau fault, extending from Belaga in the south to Niah in the north, has generated earthquakes of magnitudes 5.2 and 3.5 in May 2004 and January 2010, respectively,” he explained.

Asked to comment on SEB’s studies, Yan replied: “I don’t know what studies they have done so far and data they have collected. Whatever they should be transparent and show us what they have done so that we can comment on a professional basis whether those studies are adequate or not. This is not to criticize, but for the good of everyone.”

Torstein has assured SEB is ready to engage with the public, including non-governmental organisations (NGOs) on the safety of the dams, provided they do not have any diverted or hidden agendas.

With the conclusion that ‘so-called experts such as Save Rivers’ have hidden agendas and preconceived ideas to run down SEB and the state government, what kind of transparency can the public expect?

Torstein said: “We don’t want to spend our time discussing with some universities because these guys have decided that you guys (Sarawakians) should not have a future.

“They have a whole university there working on the findings of the studies. And I’m sure they will find something they can twist.”

Yan suggested: “Yes, all these reports (local newspaper reports on earthquakes in 2004 and 2005) should be shown to the CEO (Torstein) as proof that the threat of earthquakes in the area is real.” 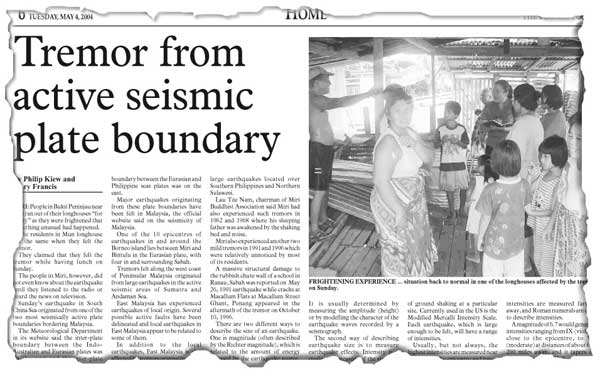