Saturday, October 8
You are at:Home»Columns»Uncle DI»The ‘not two inches above the knee’ rule 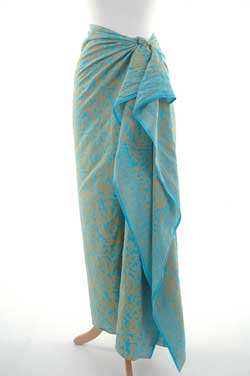 Would this sarong be good enough for the security guards?

IF you wish to register a car at the Land Transport Department (JPJ), take along with you all the documents required for the registration of a motor vehicle, your valid driving licence, your latest MyKad, the exact amount of change for the required fee, and a sarong. Oh yes … and a camera for taking a selfie, if necessary. Nowadays, everybody is a photo journalist.

The sarong made available by the security guards may have been worn many times by many women; better bring your own. That is if you are coming in a dress which is not acceptable to the authorities as personified by the guards who apparently have full powers to judge and decide what will menjolok mata of men with a serious heart condition.

In that incident, which took place early this month, a woman was at the Wangsa Maju branch to register a car in her name but would not be entertained by the counter official unless she covered her knees with a sarong (provided free at the centre) because she was showing her aurat. According to the guard that length would not qualify for the purpose of the dress code acceptable to the department. So she took the sarong, wound it around and took pictures of herself in the outfit. The pictures went viral.

I don’t know if this Talibanic dress code has been imposed on the clients of the JPJ throughout the country. At any rate, in its office in Kuching, there has been no report as yet of a ban on any female client poking male eyes with her knees.

I may have missed seeing this sort of dress whenever I go there, but then I don’t frequent JPJ office without a good reason or excuse such as paying the traffic compound or renewal of the road tax for a car. During such rare occasions, I didn’t see any female wearing a dress that could have been considered indecent. I didn’t go there to ogle females, of course, I have something else in mind – have I got enough money to pay for the fine and a balance for my morning kolo mee.

Just in case this ruling applies here in Sarawak, it’s wise for our ladies to be ready. Follow the advice mentioned above. Before a self-appointed modesty expert stops you at the entrance of a JPJ office, proceed to the nearest toilet and change into the sarong. You can do this in a bush nearby too; just shoo the mosquitoes away with the shorts. Better still come in a dress that covers you from chin to ankle.

Don’t blame the Rela member on duty. They are told by their superior officers to implement the two-inch rule, if indeed there is such a rule officially. Apparently, this has been adopted by the directorate of Rela or of the department which engages them. With or without the sanction of the ministry concerned?

If the Rela members do their job well, they will be amply rewarded. For instance, the officer who suggested to a JPJ  client at Gombak office to wear a sarong and cover her aurat was highly commended in writing by her boss.

Enough of such incidents!

I thought this incident would be the first and last of its kind, having made an international laughing stock of Malaysia once more. I was wrong. A fortnight later, at the Sungai Buloh Hospital, a woman wearing shorts was stopped by the security guards from visiting friends undergoing treatment at the hospital unless she covered her knees with a sarong. Was the woman a risk to the patients – a potential carrier of MERS or Ebola germs? Not at all, the culprit was the length of her shorts – almost touching her knees but still showing a glimpse of kneecap. Two inches down from the knees would have been acceptable.

It appears that the Sarong Rule has been extended to the Selangor State Secretariat building. This week two other women have also been subjected to it – journalists and invitees to a press conference at the Secretariat. They were told to wear a sarong before being allowed to attend the press conference by the observant men at the guardhouse. Wonder if they used their fingers to measure the crucial two inches? The journalist was wearing a skirt above the permissible length and it was a green sarong for her. Cool.

Another was late for the PC, so she passed through using another entrance to the building and thereby avoided the guards. She managed without that sarong and has managed to circumvent the SR. Next time around it will be wise of her to bring her own sarong or to wear another dress where her body above the knees would not be exposed to men.

The State Secretary defending the government quickly put the blame on someone else saying that “the security guard had acted on his own initiative”. This time, no letter of appreciation but instead a written reprimand from the State Secretary.

Then in Penang another woman wanting to have some documents authenticated by a Commissioner of Oaths was stopped by a proactive security guard at the court complex at Balik Pulau. The guard had a good look at her dress and decided that that skirt was too short. From a photo on her friend’s Facebook page, the dress would be acceptable to me but I wasn’t that security guard.

There appears to be a campaign against women’s skirts, in Peninsular Malaysia. However, women in Sabah and Sarawak had better be prepared for the implementation of the rule over here. Send your husbands instead to register or transfer ownership of a car at the JPJ office.

What’s behind the sarong?

I wonder. Is it creeping Talibanism or something that is intended to divert our attention from the many issues of the day – the 1MDB debts, the un-answered queries in the Auditor General’s report, the investigations into illegal human trafficking that has yet to bring the kingpins to justice, the 50-year old rural development problems in Sabah and Sarawak that have yet to be solved, the request for 20 per cent petroleum royalty that remains fluid, the illegal logging that has yet to result in a prosecution, the illegal fishing that has not been stopped. And corruption cases that have been swept under the sarong are yet to be lifted.

What do you think?