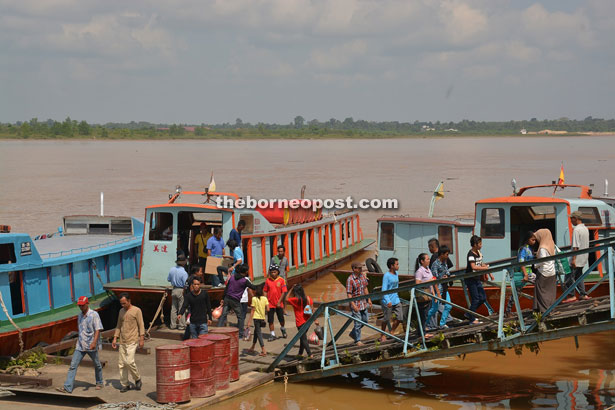 THE BAT V team has been travelling along the mighty Rajang over the past six days — starting from Tanjung Manis before proceeding to Sarikei, Meradong and Julau.

Along the way, we also visited smaller towns and settlements such as Durin town, Pasai Siong and Sungai Bidut.

At last, we finally had the time to discover more of Sibu, which is known as the ‘nerve centre’ of the central region. 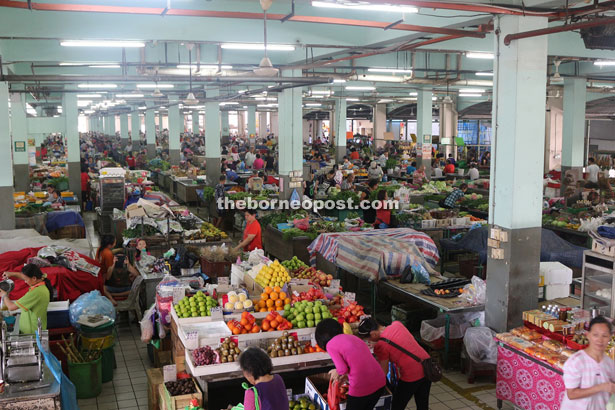 A parade of colours at Sibu Central Market which is the largest wet market in Malaysia.

Here, the team found time to explore and discover what this historical town had to offer for visitors, especially in terms of food, as it had been well-known to be among the culinary havens in Malaysia.

It was built to commemorate the vast contribution of Nai Siong to the people of Sibu. It is a well-known fact that about a century ago, the Foochows from China began arriving here at the invitation of the White Rajah to cultivate food in Central Sarawak to feed the swelling local population.

The hard-working Foochows have made Sibu grow by leaps and bounds into what it is today, with a population of about 200,000. 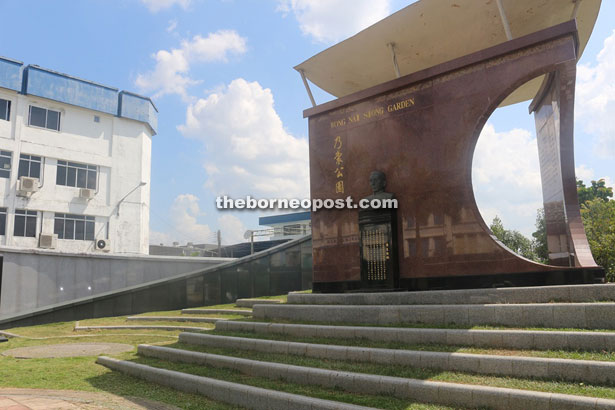 Widely known as the ‘New Foochow’, Sibu definitely looks much busier nowadays, crowded with people and its roads more congested.

In a small alley at Jalan Blacksmith near the Methodist primary school, there is a small rustic shop selling the most authentic ‘Dian Mian Hu’ (wok noodles) in town.

‘Dian Mian Hu’ is a popular Foochow dish and the two brothers — 70-year-old Kin Chiong Lui and 60-year-old Chiong Teng — have been serving customers this savoury dish for over four decades.

The brothers take turns in cooking the dish as the process is tedious and rather complicated. They would first fill a wok half-full with stock and as it comes to a boil, the flour batter would be poured around its side. 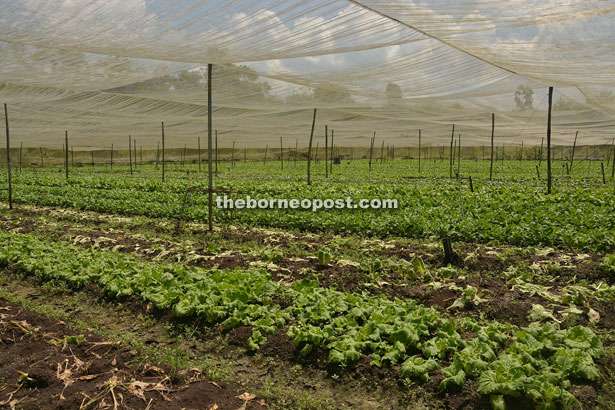 The large vegetable farm covered with protective netting by the roadside around Sungai Bidut area.

Then, the cook would delicately scrap off the batter and let it fall into the broth. To finish the masterpiece, black fungus, dried squids, fish balls, pork and light soy sauce would be added.

Having breakfast in such a famed ‘kopitiam’ is a struggle — we had a hard time finding a table that could fit the four of us since it was packed with foodies.

The silky noodles tasted heavenly with the light broth. The two beautiful ladies of the BAT 5 team, who would usually only finish half of any dish — slurped the whole bowl in mere minutes. 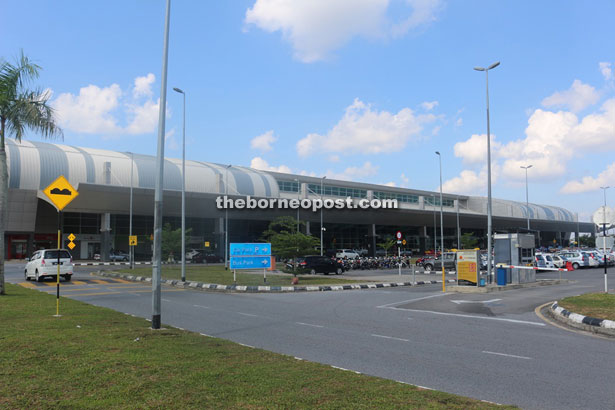 According to Chiong Lui, they have never thought of expanding their signature dish to other areas despite their business being so popular.

It seems that the Kin brothers want to keep the delightful ‘Dian Mian Hu’ as authentic as possible. Chiong Lui even told us that their recipe had only been passed down to their children.

The two have no plans of retiring anytime soon. So, fret not — this delicate dish should be around for many more years to come. 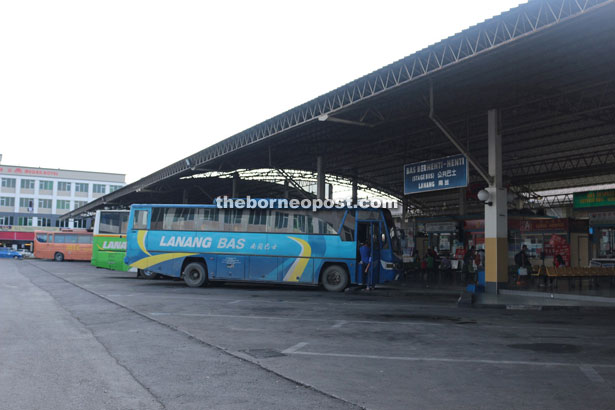 Buses lining up at the town’s regional terminal.

Just next to the shop is a small bakery selling a wide range of cakes and biscuits. The ‘satr’ is the Chinese egg cake, which revisits everybody’s childhood memory.

The shop has only been opened for six years but it has earned many loyal customers throughout.

For such delicious cakes to be priced at around 30 sen apiece, it is no wonder that these treats are sold out even before they get out of the oven!

With full tummies, we later journeyed to Sungai Bidut at the west bank of Sibu town, about 14km away from and connected by the Igan Bridge. 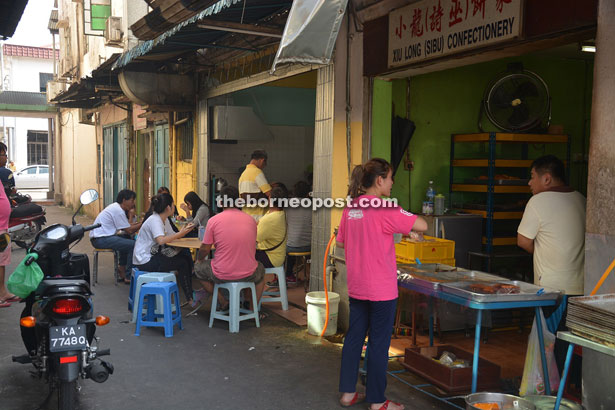 The Chup Hing Huong ‘kopitiam’ that offers the famous ‘Dian Mian Hu’, while the Xiu Long (Sibu) Confectionary sells the yummiest Chinese egg cakes at 30 sen apiece. Both are located at an alleyway near Jalan Blacksmith.

Sungai Bidut is a major vegetable production area where the Chinese farmers are the main supplier of vegetables to the town.

Large farms covered with protective netting to ensure high-quality, leafy vegetables can be seen by the roadside, as well as backyard vegetable plots in big houses scattered around the area.

Apart from this, there are also the shipbuilding yard and sawmills located there.

At Sungai Sadit, just a turn from Sungai Bidut, we met Lau Souk Ding, a 70-year-old who has a honey pomelo farm just beside her house.

“The land here is not too high nor too low, which is very suitable for growing honey pomelos,” she said.

“Most restaurants buy pomelos (or pummelo) from this area but sometimes, we cannot fulfil their demand.”

As we were enjoying the freshly-harvested fruits, Lau explained that pomelo farming had been decreasing recently due to the changing weather patterns.

“Another reason is the younger generations just have no more interest in growing them anymore.”

According to her, growing pomelos is actually not an easy task. The plant needs to grow for a minimum of six years before it is ready to bear fruits and can only be harvested twice a year when the trees have reached maturity.

“You need to constantly fertilise the tree and look out for pests such as bees and termites,” she added.

Before leaving Sungai Bidut, we stopped by at the well-known Tang Restaurant, which offers delicious roast chicken with sesame seeds and hot ‘Siew Mai’ (prawn dim sum) fresh from the steamer.

The ‘Siew Mai’, priced at RM1.80 apiece, is big and stuffed generously with meat — making every bite worth every cent. 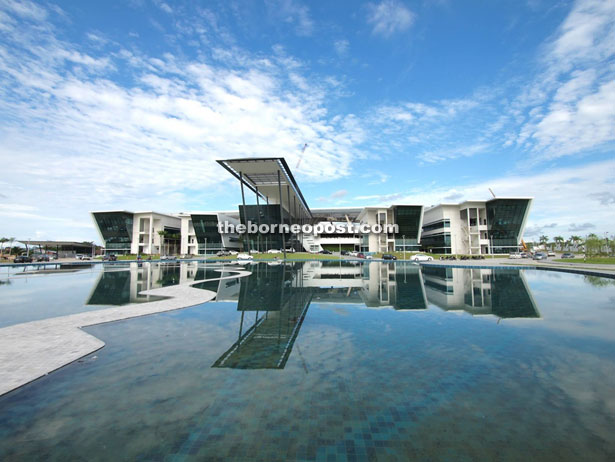 On the overall development of Sibu, Local Government and Community Development Minister Dato Sri Wong Soon Koh revealed that the next 10 years would be the ‘Sibu’s Decade’.

When asked to elaborate, said Sibu would reach its ‘maturity’ in terms of infrastructure development in the next 10 years.

“By then, it would become the main financial, commercial, economic and education hub of the central region, which will be well connected with Kapit, Sarikei and Tanjung Manis.

“Having said that, Sibu would definitely play a much greater role as it would be part of the mega SCORE (Sarawak Corridor of Renewable Energy) project which by 2030, is expected to attract a vast amount of investments and would employ some one million people,” he said.

Wong believed that with proper planning and good governance, Sibu would be set for more developments.

“With infrastructure in place, such as the port at Tanjung Manis and the expected expansion of Sibu Airport in the future, Sibu would be able to cater to a much bigger population of up to 800,000 — including people from other major towns along the mighty Rajang (River),” he said.

With the masterplan in place that would be implemented in the next 11th Malaysia Plan (11MP), such as the proposed two major outer ring roads costing some RM180 million to ease traffic congestion in the town, there is more to expect from this historical settlement, which began at Sungai Merah by the renowned Nai Siong.