Tuesday, August 9
You are at:Home»News»Sarawak»MCC inks MoU with Taiwan city 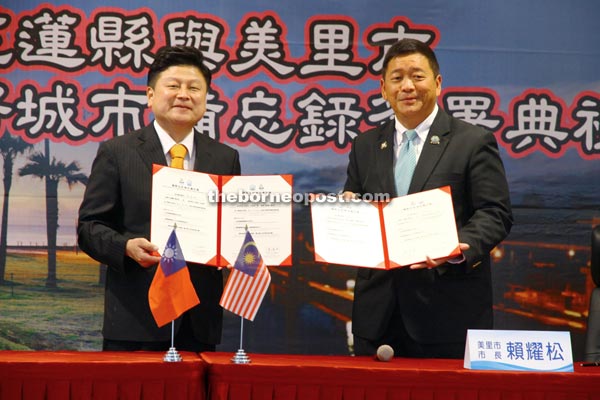 MIRI: A memorandum of understanding (MoU) on ‘Friendship City’ has been signed between Miri City Council (MCC) and Hualien government of Taiwan. Miri Mayor Lawrence Lai said the MoU was signed on June 22 during an official visit by the council led by him to Hualien.

“The MoU was signed to promote and enhance friendship and economic co-operation between the people of the two cities.

“This understanding is also to enhance the education, cultural interaction and tourist promotion,” he told the media at a press conference after chairing the council’s full meeting yesterday.

In addition, Lai hoped the MoU would enhance cooperation between both parties in various development aspects, particularly tourism. He revealed that officials from Hualien government were expected to visit the resort city and MCC in August this year.

“We would like to thank the Minister of Local Government and Community Development Dato Sri Wong Soon Koh for giving us full support towards the implementation of this programme with Hualien government.”