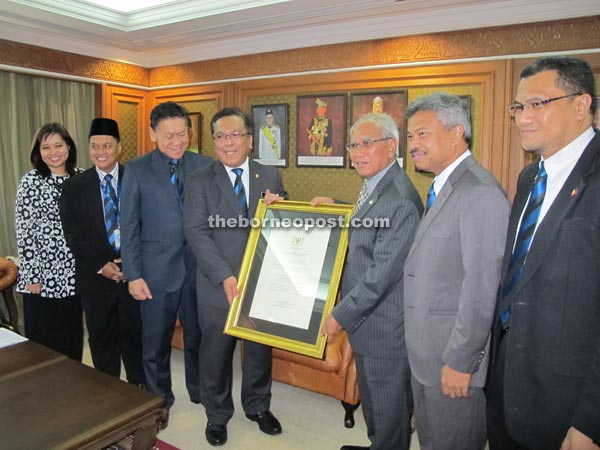 Kadim (centre) presents the Letter of Appointment to Jabu.

Upon receiving the Letter of Appointment from Unimas vice chancellor Prof Dato’ Dr Mohamad Kadim Suaidi yesterday, Jabu pledged to give his best for the university.

“This is a very big responsibility on my part, and I am proud of this appointment. Unimas is a well respected higher learning institution, and I am happy to be the second pro-chancellor,” he said when Kadim led a delegation from Unimas to pay a courtesy call on him at Wisma Bapa Malaysia here.

Jabu pointed out that education had always been the country’s top priority, and he believed once every member of the society became educated, a lot more advancement could be expected.

He said the world was based on a knowledge economy and knowledge innovation. As such, he was glad that Malaysians had been resilient enough to adapt to innovation.

He noted that student enrolment and number of graduates have been increasing at Unimas.

“There are a growing number of female graduates, which I do not know the reason. Probably the men are more adventurous in other fields or talented in other jobs rather than joining tertiary education.”

He was also pleased to announce that the British Broadcasting Corporation (BBC) is currently filming a special feature on flying lizards in the state.

“Unimas has been chosen as the venue for the scientific programme on BBC.”

Meanwhile, Unimas will be having its 19th convocation from Nov 14 to 17 when more than 5,000 students are expected to receive their scrolls.