The hornbills are a family of bird which can be found in tropical and subtropical Africa, Asia and Melanesia. Hornbills are distinctive from other birds’ species due to its massive ‘double-storey’ bill consisting of a long, deep beak with a projection known as a casque on top.

Hornbills are primary frugivorous with figs predominant in their diet, but they also feed on insects and small animals. As their tongues are too short, they cannot swallow food caught at the tip of their beak, so they toss their food from the tip of their beaks back to their throats while eating. They are considered to be important seed dispersers in the forest.

Hornbill breeding biology is remarkable. The male hornbill begins courting the female by bringing her food a month or more before mating. When the time comes to lay eggs, the female will enter a nest hole in a hollow tree. The pair will then spend two or three days plastering up the hole with the female’s dropping, with the female on the inside and the male on the outside.

The female and chicks then rely on the male to collect and deliver food through the small hole. Once the nestlings have gotten their first feathers, the female will break out of the chamber and join her mate in providing food for their young. Hornbills are also known to be collective and they generally travel in pairs, small family groups and sometimes in larger flocks. They pair for life and bond to defend against other members of their species. This helps to ensure adequate food supply as well as “exclusive rights” to nesting sites.

The hornbill is both an important bird and cultural symbol for the people of Sarawak especially the Dayak communities. The Rhinoceros hornbill, the best known of all the species, represents the State’s emblem. For the Dayaks, hornbills signify the spirit of God and they must be treated with respect. If a hornbill is seen flying over or visiting their residences, it is said that good luck and fortune will bestow the community. Hornbill elements are also incorporated into their arts, dances, carvings and ceremonial dresses.

Today, hornbills in Sarawak are totally protected species under the Wild Life Protection Ordinance (1998). Totally protected species are defined as species in danger of extinction due to hunting and habitat destruction. Penalties for keeping one as a pet, killing, hunting, capturing, selling, trading or disturbing them, or possessing any recognisable parts of these animals are severe – a RM25,000 fine and three years’ imprisonment. 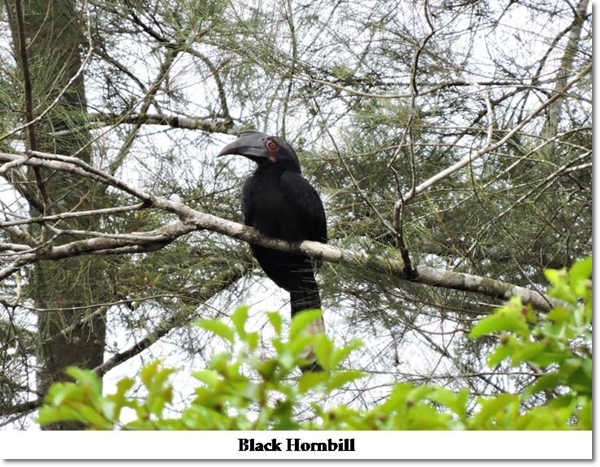 Also known as ‘Rengak’ among the locals is the most commonly found species in Sarawak. It usually populates lowland forests below 600 metres covering alluvial, peat, mangrove, heath and coastal hill forests. Male and female Black hornbills are differentiated through its casque sizes and the skin colour surrounding its eyes. The male has a larger casque than the female and the skin around its eyes are dark while that of a female is pinkish in colour. 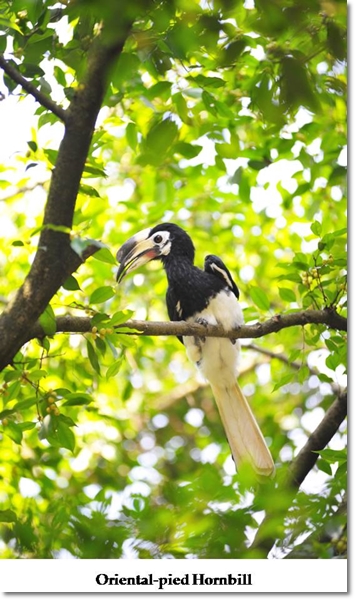 Its local name, ‘Alau Pedada’, Oriental-pied hornbills are mainly found at coastal, offshore islands and forest edges throughout the lowland forests. They usually fly in flocks of up to more than 22 individuals. It is a medium-sized hornbill. In comparison, the males have larger bills than females and lighter black base on their lower jawbones. 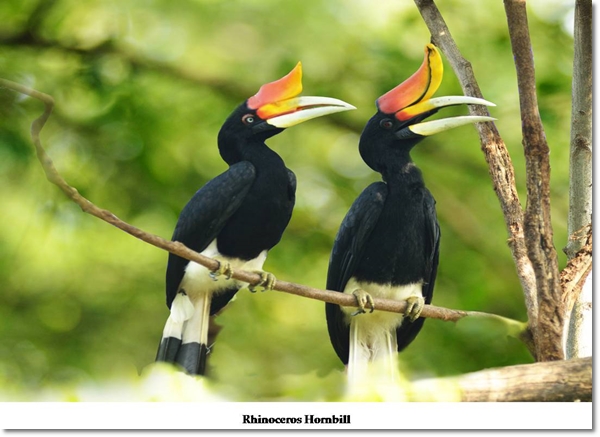 The Rhinocerous hornbills, the most known of all the species is the State Bird of Sarawak. Legendary as its name, Burung Kenyalang, it has been chosen as the Sarawak’s State Emblem. The bird is usually four feet long, has a whitish belly and white tail with a black band through the middle. Rhinocerous hornbills are mostly found in the primary lowland dipterocarp and hill forest. The males utter deep, forceful hok notes whereas females’ calls are with a higher hak. 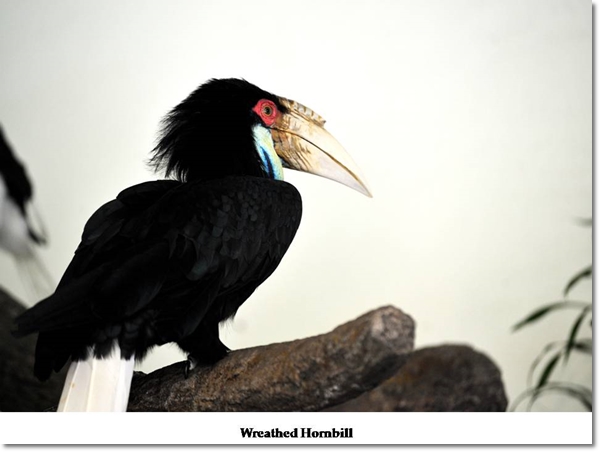 Wreathed hornbill is a large bird and is known as ”Undan” among the locals. They are found mainly in peat swamp forest, primary lowland dipterocarp forests and kerangas forests. They are usually seen in pairs or small flocks but sometimes seen in very large flocks, flying to and fro routes. Wreathed hornbills produce loud, rather breathless kuk-kwehk calls.