Tuesday, May 18
You are at:Home»News»Sarawak»Two hikers run out of steam at Bukit Lambir 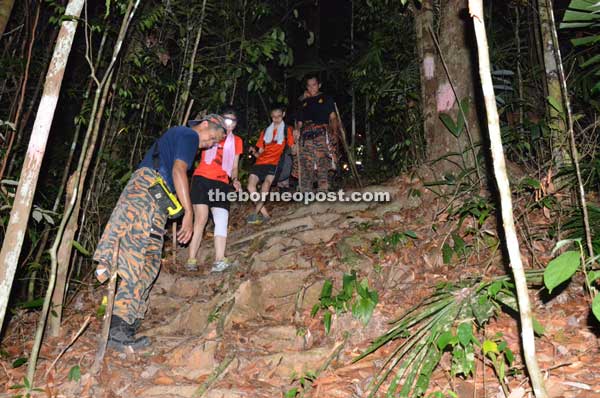 Homeward bound are personnel from Miri fire station seen hiking down the trail with the two rescued hikers.

A Search and Rescue team (SAR) was despatched to the scene, which was located at about 35km from city centre, after receiving a call on the incident around 6.30pm that evening.

“A team of SAR was assembled after being alerted on the incident,” said Zone 6 fire chief Supt Law Poh Kiong.

He added that both hikers sustained no injuries.

The team encountered the hikers approximately at 1.5km up from the base station around 10pm, resting in a hut.

The rescued duo, surname Tan and Ling, then started hiking down from the trail with the SAR team which comprised of personnel from Miri fire station, Sarawak Forestry Corporation, the park’s rangers and the Malaysian Civil Defence Department (JPAM).

According to one of the duo’s friends who went hiking on the trail that day, ‘Jong’said he had recieved a phone call from one of them (the exhausted hikers) who told him that they needed help as they could not complete the hike.

Jong said both the hikers (one male and a female) were exhausted and dehydrated.

“There were four of us hiking the trail early that day in the morning…we started around 8am… my friend and I walked ahead of them and after we reached the summit, we were making our way back to the base station, along the way back, we met them ….it was around 2pm,” said Jong.

The four friends are working as pharmacists.

The rescued hikers (standing sixth and seventh from right) posing for a group photo with their rescuers after they arrived at the base station on Friday night.