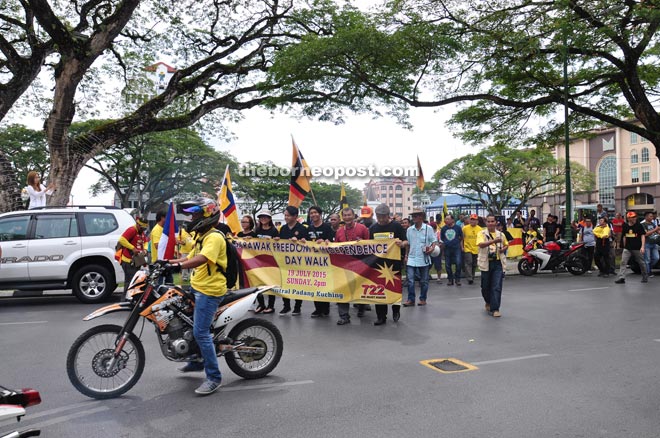 Participants prepare to begin the mini parade at Padang Merdeka. 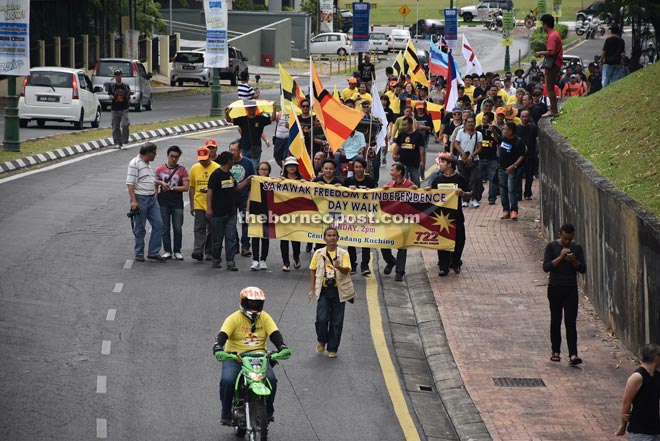 A section of the participants during the ‘Sarawak Freedom and Independence Day Walk’ yesterday. 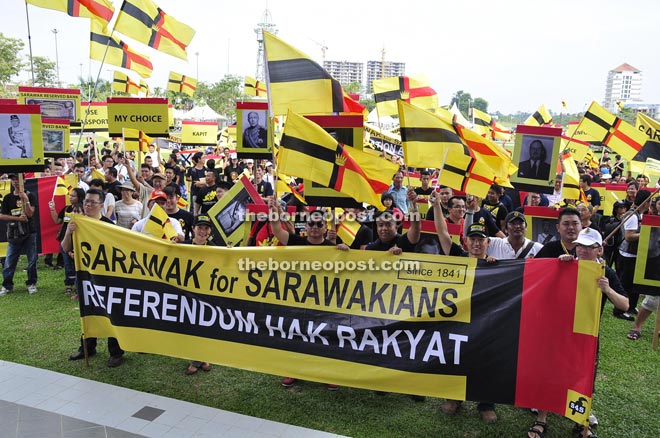 Participants at the S4S assembly in Sibu calling for a referendum. 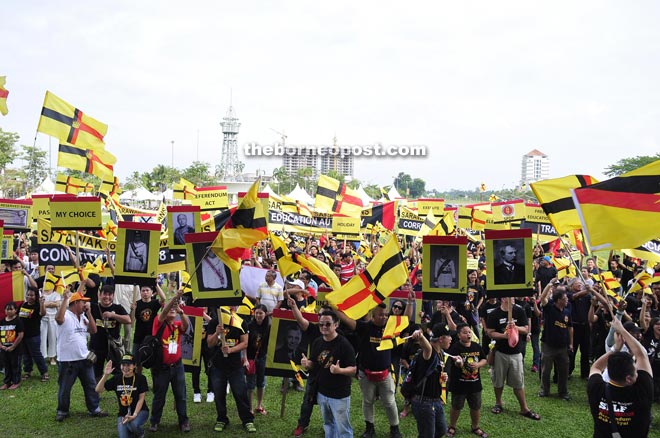 The crowd at the S4S assembly in Sibu.

KUCHING: The ‘Sarawak Freedom and Independence Day Walk’ saw a collective number of almost a thousand participants at three different locations converging to make demands from the state government to declare July 22 as a public holiday.

Organised by the Dayak National Congress (DNC), the gathering was simultaneously held in Kuching, Sibu and Miri to act as a platform for the public to celebrate the state’s independence day from British colonial rule on July 22,1963.

It was estimated that over 300 people turned up at Padang Merdeka in Kuching, while hundreds more attended similar events in Sibu and Miri.

“This is the third year that we are organising this walk. So far, this has been our biggest turnout so far. Even the number of participants in Kuching has doubled as compared to last year,” event organising member Lina Soo told the Borneo Post yesterday.

She also said that declaring July 22 as a state public holiday would also reflect the state government’s recognition towards the significant date in Sarawak’s history.

“We also duly reject Aug 31 as that is the day when Malaya gained their independence, not Sarawak,” she added.

On another note, she further thanked the Kuching police for their full cooperation to provide crowd and traffic control during the mini procession which was led by chief marshal Peter John Jaban.

Prior to the procession, Peter explained that the whole event is not a political movement and is not held to go against the government.

“Today’s (yesterday) gathering is only to observe and celebrate our state independence day in peace and harmony among ordinary Sarawakians,” said Peter, who led the procession which started off at Padang Merdeka to Jalan McDougall, Lebuh Wayang and back via Jalan Wawasan 2020.

Prior to the gathering the participants were advised to not turn the event into a platform to show their protest or to go against the Malaysian law, he said.

He also rubbished news reports saying that celebrating Sarawak’s independence day on July 22 could cause confusion among the public when it is a historic fact.

“Ironically, celebrating Aug 31 in Sarawak is actually causing confusion among the people as it is not our independence day. It is the day when Malaya was independent, not Sarawak,” he added.

He also said prior to Aug 31, 1957, Sarawak was known as Negara Sarawak and it was only on Sept 16, 1963 when Sarawak together with Sabah and Malaya formed the Malaysia Federation.

“That is why July 22 and Sept 16 are the only dates which are significant to Sarawak and her people,” he added.

Meanwhile, the July 22 independence day parade led by civil rights movement Sarawak for Sarawakians (S4S) is expected to be held on a much larger scale as participants from Sibu, Miri, Bintulu, Lundu, Sri Aman will all converge in Kuching.

“I know that there will be a bigger crowd and definitely some provocations from certain individuals. Therefore, I am urging all the participants to stay calm and if there are any problems or a commotion, everyone should immediately sit down where they are standing. This will reveal who are the trouble makers as they will be the only ones standing,” Peter said.