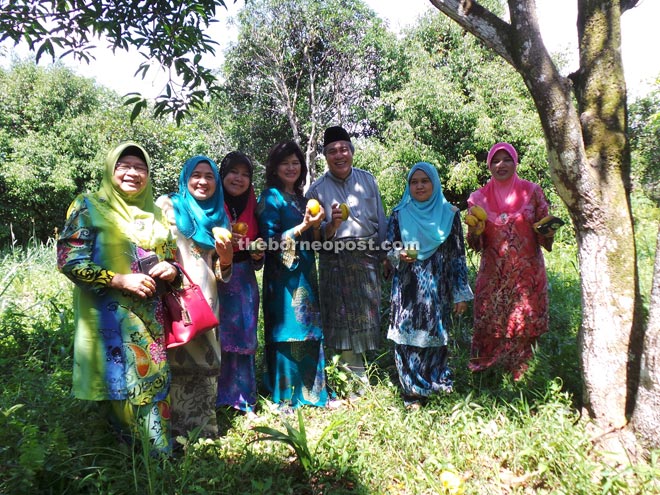 Awang Tengah (third right) and his wife Datuk Dayang Morliah Awang Daud (fourth left) are delighted to return to their roots as they can enjoy the fruits in their family orchard at Kampung Dato.

LAWAS: The oil and gas (O&G) cabinet committee under the Ministry of Industrial Development is a holistic approach in pushing for greater downstream manufacturing and progress monitoring of the oil and gas industry in Sarawak.

Minister of Industrial Development Datuk Amar Awang Tengah Ali Hasan, who is also Second Minister of Resource Planning and Environment, said it will be a mechanism to oversee the rollout of the substantial concessions from national oil gas corporation Petronas and related developments.

“This committee, separate from the royalty negotiation committee, involves stakeholders that include representatives from multi-government agencies, industry players and respective chambers of commerce and industries in the state,” he told The Borneo Post.

He said this is a progression from the state’s push for greater participation of companies and Sarawakians in the oil and gas industry in the state led by Chief Minister Datuk Patinggi Tan Sri Adenan Satem.

He was met after his Hari Raya visit with his family to Kampung Dato in Kuala Lawas, their home village, on Monday after holding a two-day Hari Raya open house in Lawas over the weekend.

He pointed out that the primary objective was getting maximum benefits from the RM2.1 billion worth of contracts from Petronas for Sarawakian companies, CSR projects, technical skills training and other projects in the state.

“We want to monitor the RM2.1 billion contracts for Sarawak companies and the committee will also oversee the progress and related matters which the government could do for benefit of our companies in the state,” he elaborated.

On a related matter, Awang Tengah said Sarawak was making greater push for value-added petrochemical products through promotion of downstream activities as reflected in the request for more gas supplies to the state.

On input, he said it would involve the stakeholders, especially industry players, on how to maximise benefits and enhance the industry particularly for Sarawak entrepreneurs and the people.

Meanwhile, Assistant Minister for Industrial Development (Investment and Promotion) Datuk Julaihi Narawi last Saturday said the state cabinet had last month given its nod to the formation of the oil and gas committee, and Awang Tengah would chair its first meeting soon. At the same time, he revealed that his ministry would have a new unit – Oil and Gas Unit.