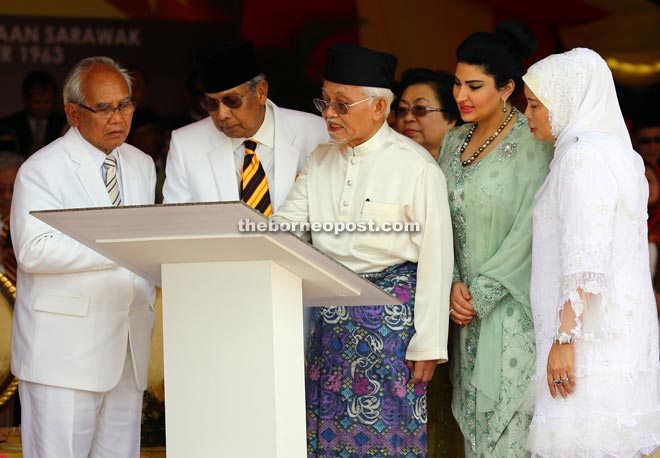 Taib (third right) signs the plaque to mark the 52nd anniversary of Sarawak’s independence, witnessed by (from left) Jabu, Adenan, Ragad and Jamilah.

KUCHING: An official ‘Day of Remembrance’ to commemorate the 52nd anniversary of Sarawak’s independence from the British was held at the new State Legislative Assembly (DUN) Building yesterday.

The top state leaders were dressed in all white as they came together to honour and acknowledge such an important event in the history of Sarawak.

The celebration featured a truly wonderful theatre about Sarawak’s struggles to gain independence from British colonisation 52 years ago that was staged at DUN’s Dataran Perbarisan.

For a short time, Sarawak was indeed granted self-government on July 22, 1963, on condition that it would join the formation of Federation of Malaysia on Sept 16 the same year.

Sir Alexander Waddell was the last governor of the colony as he left the Astana and boarded a white sampan to cross the Sarawak River. He then handed the administration of Sarawak to Sarawakian citizens, with the colonial flag lowered and the Sarawak flag raised.

Before he left, the governor appointed Stephen Kalong Ningkan as the first chief minister of Sarawak.

Later, Taib penned his signature on a plaque bearing a black and white photo of past leaders to mark the 52nd anniversary of Sarawak’s Independence.