Saturday, January 22
You are at:Home»News»Sarawak»Come together as 1Malaysia community, Kapit folk told 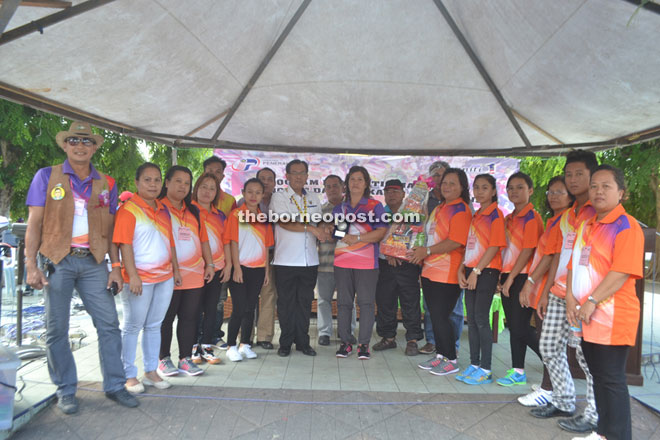 Jamit hands over a hamper to a representative of Rumah Manok Mancak, Sungai Yong, champion of the poco-poco competition.

KAPIT: The people here have been called on to work together in the spirit of 1Malaysia to strengthen racial and religious harmony.

Political secretary to chief minister Jefferson Jamit Unyat said being part of a plural society with great diversity in ethnic races, customs and religions, they should endeavour to come together to cultivate inter-racial and cultural understanding as well as religious tolerance and harmony to create a 1Malaysia community.

He added that this was vital to bring peace and stability so that the government could concentrate on development activities to bring Sarawak to greater heights.

“The 1Malaysia Community (Komuniti 1Malaysia) through its ‘Program Sepakat’ serves as a platform to bring people from different communities together.

“The objective is to promote friendship and integration among one another. Besides that, it is to inculcate spirit of volunteerism i people, enhance knowledge and to keep abreast with the current social-economic and political issues as well as government policies and development programmes,” he said when officiating at the one-day ‘Program 1Malaysia Kapit 2015’ at the Town Square here on Saturday.

At the same time, he called on the people here to support the government and vote for Barisan Nasional (BN) candidates in the next state election.

“Since becoming chief minister a year ago, Adenan has changed the political landscape. His ‘Go Rural’ policy benefits us because Kapit is a rural constituency.

“Since he became chief minister, he officially visited Kapit twice— in 2014 and 2015 —which clearly demonstrates that he is a man

who walks the talk,” he emphasised.

Jamit also spoke about why they needed to support the BN candidate in Pelagus constituency in the next election.

“This is because the ‘wakil rakyat’ (people’s representative) must be able to work closely with the Deputy Minister of Rural and Regional Development Datuk Alexander Nanta Linggi, who is Kapit MP.

“In 2016 when the 11th Malaysia Plan is implemented, the government will have many development activities in Kapit. Therefore, it’s important that we support the government to ensure that all projects would be carried out smoothly for the benefit of the people,” he stressed.

Later, he handed out prizes to the winning teams.

The ‘Program Sepakat’ was run by Kapit Information Department and was participated by about 200 people from Nanga Antaroh, Sungai Yong, Taman Indah Jalan Selirik and Melekon.