Saturday, December 3
You are at:Home»News»Sarawak»Gramong’s ex-student reminisces about the good old days 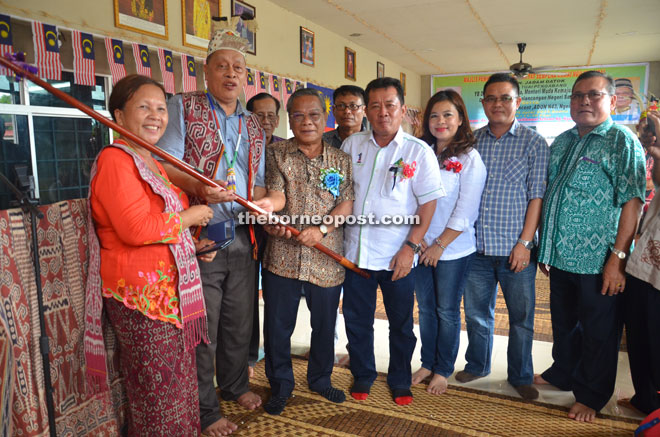 Jadam (second left) presents a blowpipe as a memento to Gramong (third left) as (from right) Ambrose, Jabang, Susan and Alexander look on.

KANOWIT: It was a walk down memory lane when Jadam Datok reunited with his former teacher who is now an assistant minister.

Jadam, 61, who holds a Bachelor Degree in Teaching English As A Second Language (TESL) was in Form 2 then.

He retired as a teacher in September last year and is now the chieftain of his 12-door longhouse in Nanga Ngungun Resettlement Scheme.

On Saturday, he threw a celebration to show his appreciation to Gramong who he still addressed as ‘cikgu’ (teacher).

“If it were not for you ‘cikgu’, I would not have been the person I am today.

“I am forever grateful that you taught us,” he said during a meet-the-people session and Ngiling Bidai (closing of Gawai) at his longhouse on Saturday.

Gramong in his speech said he was still studying at Universiti Malaya when he took up the temporary teaching post at the school.

He remembered he caned his students then as a way to discipline them.

“To me discipline is the key to be successful. Without discipline we cannot achieve anything in life,” he said.

Gramong, who is also Machan assemblyman, later commended Jadam for his willingness to serve the community as the longhouse chief to replace the late Tuai Rumah Mambang.

He hoped Jadam would use his 38 years of experience in education in executing his new duty.

Meanwhile, SMK Sedaya, which had been relocated to a new site, is among the oldest schools in the state.

It was known as Kanowit Rural Improvement School when it was first set up in 1957 to provide training in agriculture to Bumiputera students.

The school was officially declared open on April 26,1958 by the then Third Division Resident, D C White.

On May 5, 1972, the chief minister visited the school again and suggested the name ‘Sedaya’ as an abbreviation for Sekolah Menengah Dato Haji Abdul Rahman Ya’kub.