Wednesday, January 19
You are at:Home»News»Sarawak»Plans underway to set up new clinic in Sebuyau 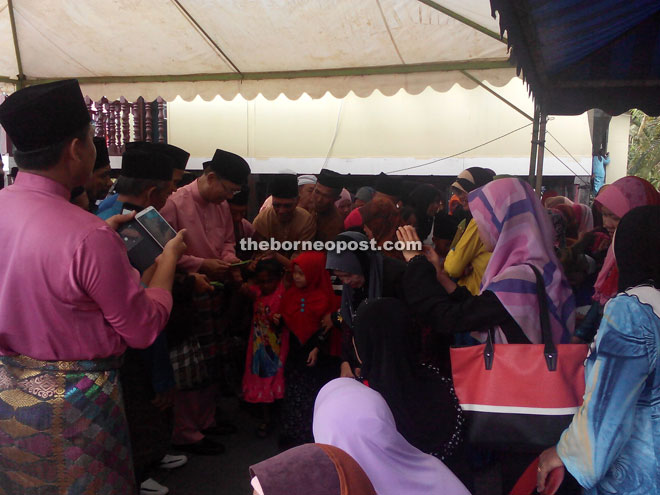 Julaihi giving away ‘duit raya’ to the children of Kampung Masjid during the Hari Raya gathering.

SEBUYAU: Assistant Minister of Rural Development Datuk Julaihi Narawi is all for the plan to have a new clinic here.

According to him, a site near Sebuyau New Township has long been approved for the construction of the facility.

“There is a need for a new clinic here (Sebuyau) and I will be pushing for its speedy implementation by the federal government,” he announced during a Hair Raya Aidilfitri gathering at Kampung Masjid here on Saturday.

Julaihi, who is Sebuyau assemblyman, assured his constituents that he would bring up the matter to the Health Ministry. Additionally, he said a doctor had also been posted here, making it more relevant for the constituency to have a new clinic.

“The doctor will report for duty early this month,” he said.

This, he said, was to enable the government to continue its mission to develop the rural areas.

“Sebuyau is a rural area and with the government focusing on rural development, it is only right to continue supporting our chief minister.”

Julaihi, who is also Assistant Minister of Industrial Development (Investment and Promotion), also hoped that the people would not be influenced by those from the opposition political parties from Peninsular Malaysia, who did not understand the needs and problems of Sarawakians.

“The Barisan Nasional-led government is committed to helping the people, unlike the peninsula-based opposition parties, who do not understand the local situation.”

Later at the gathering, Julaihi approved a RM50,000 allocation for the village committee and promised to seriously look into their request to have proper drainage, road upgrades and a surau.

The function was also attended by state administrative officer for the sub-district Ajis Ahmad.