Friday, June 25
You are at:Home»Business»Sheda survey the first step to reduce gap 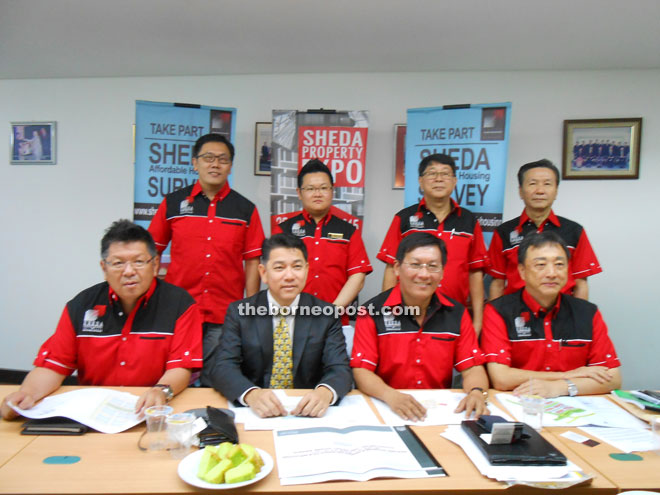 Wong (sitting, second right) with other members of Sheda at the press conference showing some of the development proposals.

KUCHING: The Sarawak Housing and Real Estate Developers’ Association (Sheda) has launched its online Sheda Affordable Housing Survey for Sarawakians in a bid to reduce the growing gap in the Sarawak housing market which comprises of those who generally earn above RM3,000 but below the required amount to sustain a housing loan for a suitable house in today’s market.

Sheda president Joseph Wong said the survey aimed to register members of the public who are interested in purchasing affordable houses priced at RM250,000 and below throughout Sarawak.

The survey also aims to gather sufficient information to substantiate Sheda’s observation that there was a growing gap in the Sarawak market between low-cost houses and normal-priced houses.

Several months ago, Wong said Sheda had written to the State Government, proposing an affordable housing scheme to fill in the vacuum for those members of the public who are not eligible to purchase low-cost houses because their incomes are more than RM3,000 per household.

“Neither can they afford to buy houses at the current market price,” he added.

Low-cost houses are sold at a statutory selling price to those who meet the eligibility criteria. In order to be eligible, the household income of the applicant has to be at RM3,000 and below.

Sheda noted that the growing gap therefore comprises those who generally earn above RM3,000 but below the required amount to sustain a housing loan for a suitable house in today’s market.

Having done research and studies on this group of people in the category, Wong said Sheda has found that the only type of houses they can afford to buy is those that are selling at RM250,000 and below.

Sheda thus took the initiative to come up with a proposal to the State Government to build houses that are priced at RM250,000 and below with a minimum floor area of 850 square feet (sq ft) and consisting of three bedrooms and two bathrooms.

He emphasised that the Sheda Affordable Housing proposal was not in competition with the Government’s housing schemes such as MyHome1, MyHome2 and PR1MA, which only provide a limited number of such houses in Sarawak.

To build such houses, Sheda has requested the State Government to relax some of the planning criteria.

The proposal aims to maintain the standard planning requirement for bulding normal houses. However, due to heavy land costs, the State Government will have to relax a few criteria for the proposal to be workable.

“We have actually submitted (this proposal) to the State Government and they have actually called us in for clarification and we are waiting for their decision, whether to accept our proposal or not,” he said.

Sheda would like the State Government to consider the proposal which, if successfully implemented, could benefit the low to middle income group, as well as stabilise current housing market prices by balancing apportioned demand.

“We will be receiving more proposals from the members, hopefully once we hit 10,000 units. When the approval is granted, we will commence the formal application and get the relevant approvals and hopefully we can kick off this project soon,” Wong said.

“Once we have the information from the public who are registering with us, we will know where to build the houses for them,” Wong said.

Subject to the terms and conditions of the scheme and availability of units, members of the public who register with the Sheda Affordable Housing Survey will be given priority to purchase houses built under this scheme.

Members of the public who are interested to participate in this survey can visit www.sheda.org.my/affordablehousing or go to Sheda’s booth at the Sheda Property Expo which will be held from September 25 to 27, 2015 at BCCK.