Monday, February 24
You are at:Home»News»Sabah»Iconic species for eco-tourism loses more habitat in Kinabatangan 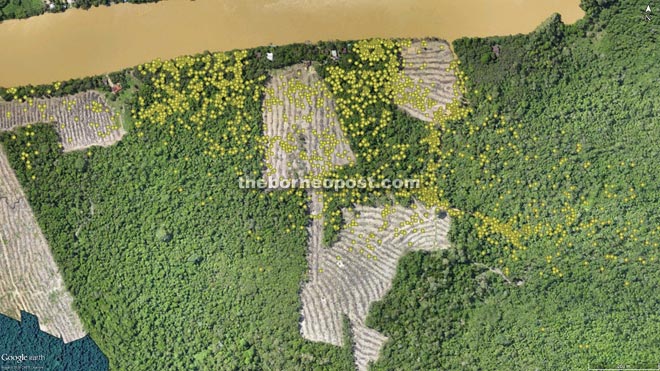 The latest drone image of the area, taken July 2015, with the 2012 points on top, showing that half of Gambu’s home range has been cleared. 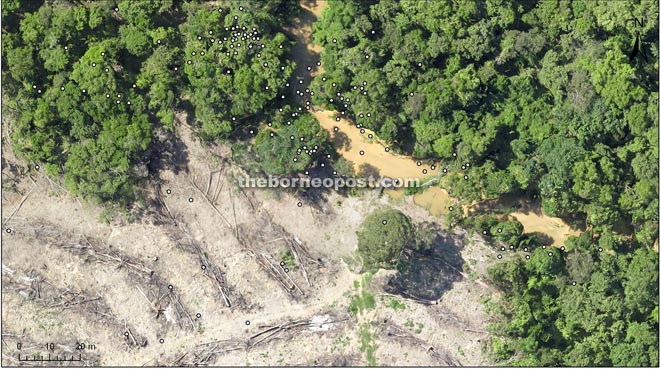 A single tree remaining in an area commonly used by proboscis monkeys to cross the tributary.

KINABATANGAN: Gambu was once a “happy” proboscis monkey living with his group in the riparian forest of the Kinabatangan and one of its tributaries, Sungai Sukau. But one morning, half of his home range was cleared, all trees (including some parts of the riparian reserve) were felt to leave place (soon) to a rubber plantation.

Gambu (short for Gambunan who was a Dusun group leader from Tambunan) is a male proboscis monkey that was set up with a satellite collar in June 2012 as part of a collaborative project between Danau Girang Field Centre (DGFC) and Sabah Wildlife Department, funded by Sime Darby Foundation.

DGFC director Dr Benoit Goossens said the aim of the satellite tagging programme is to understand the ranging patterns of proboscis monkeys and the factors impacting their movements and density in order to determine the adequate amount of habitat available in order to sustain a continuous viable population in the Kinabatangan region.

“With the continuous degradation and loss of habitat in the Kinabatangan, I wonder whether the proboscis monkey and other wildlife have a chance to sustain viable populations in this iconic eco-touristic jewel that is the Kinabatangan,” he said.

“I understand that the land that has been cleared is native land but what about the riparian reserve that was cleared at the corner of the Kinabatangan River and Sungai Sukau, and along the latter?” he asked.

Goossens said if the government is not imposing a moratorium on further land conversion in the Kinabatangan, Sabah will lose one of its most iconic touristic assets.

According to the director, the Kinabatangan Wildlife Sanctuary is one of the best places in Borneo to encounter Bornean elephants, orangutans, proboscis monkeys, estuarine crocodiles, Storm storks, rhinoceros hornbills and hundreds of other species. “If people continue converting the land along the river, legally or illegally, tourists will desert the region,” he said.

“When reading Section 38 of the Sabah Wildlife Enactment 1997, it says that any person who intends to clear any land in natural forest for cultivation shall not less than 30 days prior to the intended commencement of such clearance notify the director of such intention,” pointed out Goossens.

“The director upon receipt of such notification shall cause an inspection of such land to be carried out and notify the person who gave the notification that the clearance operation may proceed or an animal rescue operation shall be necessary prior to the commencement or during the clearance or logging operations … I believe that the director of Sabah Wildlife Department did not receive such notice and was not given the opportunity to rescue animals within the area,” he added.

“How ironic it is when organisations such as Nestlé and their project RiLeaf, Sime Darby Foundation, MESCOT, WWF-Malaysia, HUTAN, DGFC, BCT, KiTA spend millions of ringgit and hours of manpower to restore riparian reserves and deforested lands when at the same time forest is still cleared, riparian reserves and wildlife habitat destroyed,” he said.