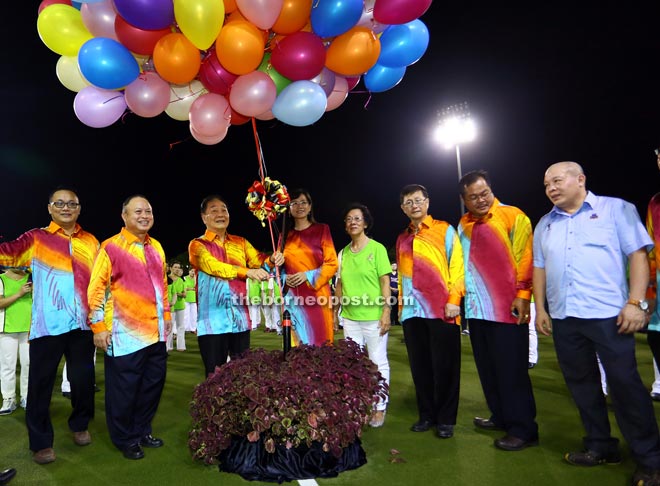 Wong (third from left) launches the Folk Dance Display at the Sarawak Hockey Stadium in Kuching.

KUCHING: Six hundred dancers, most of them women, had the chance to display their skills at the Kuching Festival Folk Dance Display on Sunday.

The dancers were not only from here; some were from Sibu, Mukah, Miri, Kota Kinabalu (Sabah), Penang and Singapore.

Minister of Local Government and Community Development, Dato Sri Wong Soon Koh, who officiated at the spectacle at the Sarawak Hockey Stadium in Padungan, said he was delighted to see so many dancers from so many places displaying their skills.

“Such an activity helps promote peace, unity and harmony, and as such this folk dance event is always welcomed here. I hope those who came from outside the state will return home with fond memories of Sarawak,” said Wong.

On the Kuching Festival Food Fair, which started on July 31 and will end on August 23, Wong hoped it would continue to grow in popularity.

“Events such as the Kuching Festival Food Fair are what my ministry likes to see organised in the state.

“MBKS has never failed to impress Kuching folk when it comes to organising this fair. I hope Kuching Festival Food Fair will continue to be organised every year.”

The food fair, which is held at Dewan Masyarakat in Padungan, featured 155 food stalls this year.

Chan said his office wanted to give young entrepreneurs a chance to try their hands in doing business at the fair.