Wednesday, June 3
You are at:Home»News»Sarawak»Revving up war on the silent killer 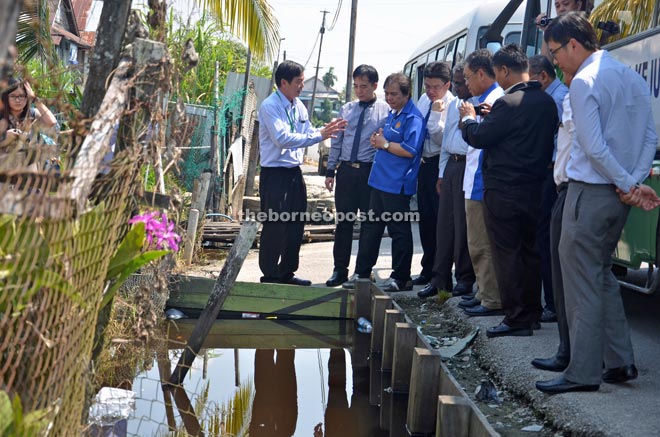 Dr Jerip (third left) listens to an explanation by a staff of Sibu Health Office (left) during a site inspection at Belian Lane.

SIBU: The state launched its Dengue Task Force yesterday with a long term plan to reduce dengue cases in the state in the next one or two years.

Datuk Dr Jerip Susil who chairs the task force said the idea was suggested by the then deputy prime minister Tan Sri Mudyiddin Yassin who called on all states to set up a dengue taskforce as dengue had become one of the critical diseases in the country.

Dr Jerip said the taskforce was to coordinate the fight against the mosquito borne disease in all divisions in the state.

“We are now looking into how the taskforce can go down to the ground which means every division will have divisional level taskforce to be headed by the Resident.

“The divisional-level taskforce will include the Health Department, Fire and Rescue Department, Education Department and other relevant agencies.

“We want to create very serious awareness of the threats of dengue at kampung-level and in all strata of society,” he told a press conference after chairing the first meeting of the taskforce here yesterday.

Dr Jerip, who is also Assistant Minister of Public Health, said the taskforce at divisional-level would report to the state-level taskforce every month on their activities.

The state-level taskforce, he said, would have a meeting once every three months for it to review its progress, strategies and other matters related to the dengue situation.

He also said every divisional-level taskforce will come up with its own terms of reference.

“For the short term plan, we are looking forward to the launching of state-wide Anti Dengue Day somewhere in September or October.

“We found out that dengue increases during the wet season in October, November and December until January when there is always dengue outbreak,” he said.

On dengue cases, Dr Jerip said a total of 1,350 cases had been reported from January until Aug 9 this year, which was an increase of 44.5 per cent or 416 cases compared to 934 cases reported within the same period last year.

“Currently, dengue outbreaks are occurring in five localities – three in Sibu and one each reported in Sri Aman and Meradong.

“There is no hotspot reported from these outbreak localities. There are two deaths related to dengue reported in Selangau and Sibu in the state so far this year,” he added.

Still on the same matter, he said the Vector Borne Disease Control Units of Sarawak Health Department had conducted fogging on 141,696 premises and inspected 76,796 premises state-wide so far.

Out of 76,796 premises inspected, he said 1,660 were found to be breeding Aedes mosquitoes.

“The department has issued a total of 204 compounds and so far a total of RM43,250 in compound amount had been paid.

“There are five premises brought to court for breeding Aedes mosquito,” he said.