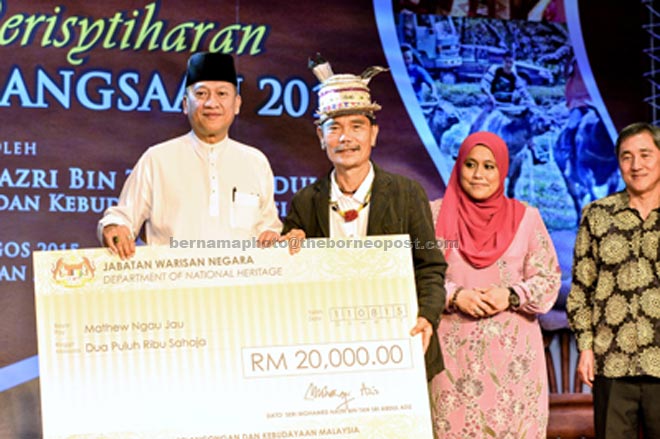 Nazri presents a cheque for the consolation prize to Ngau (second left) at the proclamation of National Heritage 2015 at Muzium Negara yesterday. — Bernama photo

KUALA LUMPUR: Sape music player Mathew Ngau Jau, a Kenyah from Sarawak who performed in Paris in 2008, has been proclaimed a national heritage by the Tourism and Culture Ministry.

Ngau, who is also known as ‘Sape Master’ is among five living legends who received similar recognition at the proclamation of the National Heritage 2015 which was officiated by its minister Datuk Seri Mohamed Nazri Abdul Aziz in the National Museum here.

Other legends receiving the recognition were Romli Mahamud, a storyteller or ‘Awang Batil’ from Chuping, Perlis; and Datuk Aripin Said, the solo ‘lagu-lagu rakyat’ singer from Mukim Bera Temerloh, Pahang.

Saad Taib, from Jitra, Kedah was also recognised as a national heritage for his efforts to preserve the ‘Mek Mulung’ performance while Maznah Anak Unyan, an Orang Asli woven handicraft artist in Pulau Carey were recognised for her efforts to revive her community’s dying heritage.

Mohamed Nazri said the proclamation was the highest national recognition being accorded to sites, objects or living legends that were seen as important in the country’s historiography.

“The government will not forget the contribution of these living legends. Continue to contribute to the country and such efforts can preserve the nation’s heritage,” he said when speaking at the event.

Mohamed Nazri said the declaration of any heritage site did not meant that the government could take possession of its status.

The public can view the National Heritage exhibition being held from today until Aug 31. — Bernama