Sunday, September 20
You are at:Home»News»Sabah» Flower Festival launched in Tenom 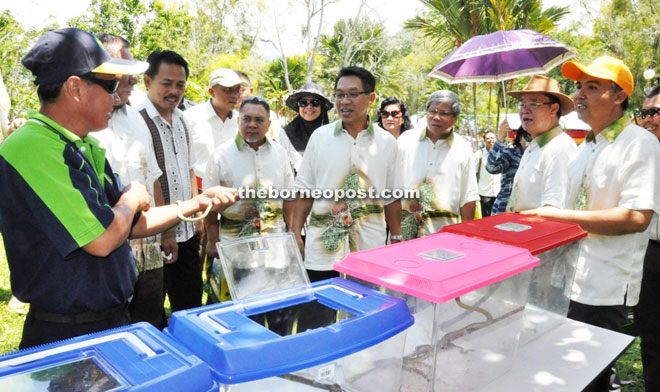 TENOM: Rural Development Minister Datuk Radin Malleh said the upgrading of the Sabah Agriculture Park (TPS) in Lagud Sebrang here as announced by Chief Minister on November 14 last year is proof of the state government’s commitment and determination to make it as a park, a plant conservation and flora learning centre besides making it one of the best agro-tourism destinations in the region.

In this regard, he said the Sabah Agriculture Department should take immediate action on the Chief Minister’s announcement and commitment to upgrade the park.

“With this upgrade, it is expected to increase the number of visitors to the park, which currently receives an average of 24,000 visitors a year,”he said when opening the Flower Festival at Sabah Agriculture Park Lagud Sebrang here on Saturday.

Radin said he appreciated the commitment of the Chief Minister to upgrade the park. The plant conservation programs implemented by the park should also be maintained for future generations to become attraction for researchers and tourists.

According to him, foreign and local researchers coming to see and explore the beauty and joy in this area shows that the park has its unique character and charm of its own.

He said the Flower Festival is one of three annual events organised by the State Agriculture Department to promote the park as one of the major agro-tourism destinations in the country.

The festival this year, he said, lasted for two days from August 15 to 16 and is the 13th time to be organised by the Sabah Agriculture Park.

Radin noted that the development of the park as a destination for agro-tourism has created business opportunities that can provide income to businesses and employment opportunities for the locals here.

The organising of the festival will be able to nurture and nourish the love and beauty of the flora and fauna, thus cultivating healthy and prosperous lifestyle for the people.

“Through this acculturation, the government’s vision of making Malaysia the country with the most beautiful parks by the year 2020 will become a reality.

“The Flower Festival is an opportunity for all segments of society to showcase creativity and market the products, and the results of their efforts will be a factor in promoting industrial growth of flowers and landscapes. The fair was a strategic meeting place between sellers and buyers of flowers and to share information as well as review the best way to improve the industrial landscape and local flowers.

“It is also an effective living classroom for students and researchers from institutions of higher learning to study, appreciate and learn about aspects of creation and park design,”he said.

For example, Radin said last year the British Broadcasting Corporation (BBC) chose the park as the filming site for the study of flying snakes or in the Murut language known as‘Kukuo Ralaa’and this has made the people in this area proud.