Wednesday, March 3
You are at:Home»News»Sarawak»‘PRS, SPDP to discuss merger at supreme council meeting’ 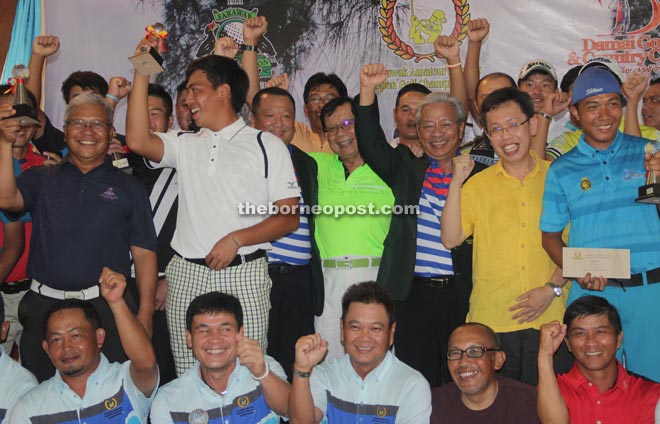 KUCHING: Parti Rakyat Sarawak (PRS) leaders will discuss in detail the proposal to merge with Sarawak Progressive Democratic Party (SPDP) at its next supreme council meeting.

Party president Tan Sri Datuk Amar Dr James Masing said he could not comment yet on the matter until PRS supreme council came up with a decision in a meeting to be chaired by him at a yet to be determined date.

“I tell you what. My Youth and my Wanita chiefs have mentioned it, and said what need to be said on the merger. For me, I have to discuss the details with my Supreme Council members. We have yet to meet on what are the details.

“Until that happens, I will not make much comment on it because what I feel may not represent what others in the Supreme Council would feel. So, I have to wait for their decision. That would have to be discussed in our next Supreme Council meeting when I talk to them,” he told reporters after officiating the 8th Sarawak Amateur Masters golf tournament at Damai Golf and Country Club (DGCC) yesterday.

The proposed merger between the two Barisan Nasional components was rekindled after a SPDP supreme council meeting chaired by president Datuk Seri Tiong King Sing on August 16 resolved that SPDP would seriously reach out to PRS to realise the joint proposal made by the two parties some years ago.

PRS deputy president Datuk Joseph Entulu has also commented by saying that while the matter is worth exploring, the proposed merger is a matter that requires further discussions.

“We are thinking along the same line on what needed to be done, to be able to play together and understand each other. That to me is very important, and a prelude to physical merger.

“Merger of minds comes first, like you go for dating, you got to know each other first. So, now I got to discuss with my Supreme Council members what to do next,” he said.

To another question, he said the next supreme council meeting would also discuss PRS claims on some of the 11 new seats which might see action in the coming state election.

Some 180 golfers including those from as far as Taiwan took part in the competition, which offered YB Tan Sri Datuk Amar Dr James Jemut Masing Challenge Trophy and RM7,500 cash as the main prize.