Tuesday, October 4
You are at:Home»News»Sarawak»Be well-versed in teachings of Islam, Muslims advised 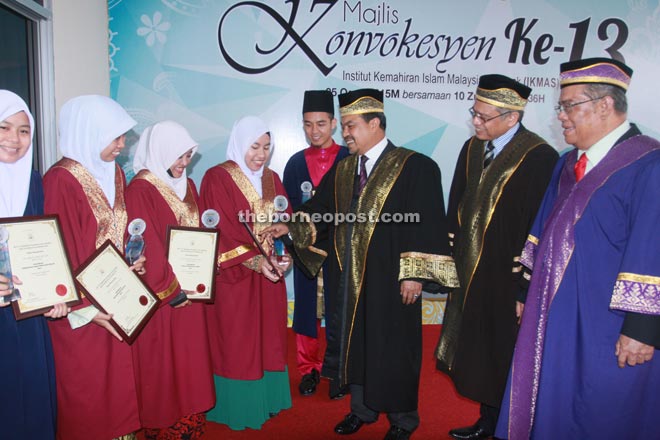 Jamil Khir (third right), together with Putit and Othman (right and second right, respectively) talking to some of the award winners after the graduation ceremony

KUCHING: Muslims should learn and understand the correct teachings of Islam so that they will not be easily misled by false doctrines.

Minister in the Prime Minister’s Department Major General (B) Datuk Seri Jamil Khir Baharom said this was to avoid them being swayed by the instant spread of information via online social media, without first checking and verifying the information for authenticity.

He cited the involvement of some individuals in Islamic State (IS) as an example of people being influenced by false doctrines.

“Some people joined the movement after they sympathised with the sufferings faced by the people in affected countries such as Iraq, Serbia and other countries and wanted to be involved, because they thought it was ‘jihad’ (holy war) when actually it was not.

“This happened due to their misunderstanding or shallow knowledge of the true teachings of Islam,” he said.

He told reporters this at the graduation ceremony of Institut Kemahiran Islam Malaysia Sarawak (Ikmas) at Telaga Air near here yesterday.

In this respect, he advised all quarters to play their part.

“While the government is closely monitoring their activities, we also hope that everyone could play their role in educating the young generation by telling them that they are not doing the right thing,” he said.

Adding this was where Islamic institutions such as Darul Quran in Kuala Lumpur and Ikmas could play a vital role, he said efforts were being made to upgrade both institutions to college universities in the near future.

On a related matter, he advised Muslims to be well versed in the teachings of Islam because with adequate knowledge, they would be able to rebut the negative perception people have on the Muslim community and Islam.

“It is because of the misunderstanding on the teachings of Islam that some people have labelled Muslims as terrorists. Islam never teaches people to be violent,” he said.

Thus, he reminded those who graduated from Ikmas yesterday to make correcting such misconception their task and challenge.

At the ceremony yesterday, 91 students received their diplomas, while 20 others obtained certificates.